Rosenstein Is Safe, For Now 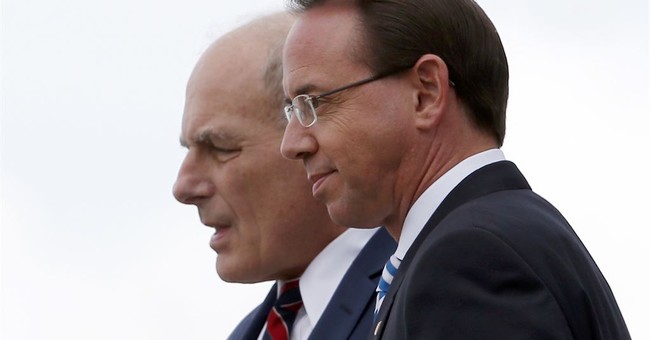 After a bombshell report that Rod Rosenstein wore a wire to secretly record President Trump and invoke the 25th Amendment to remove him from office, most suspected the deputy attorney general’s days were numbered. But on Monday, Trump signaled that’s not the case.

“No, I don’t,” Trump told reporters ahead of a trip to Orlando, Fla., for a speech to a law enforcement group, when asked if he had plans to fire Rosenstein.

"I’m not making any changes. You’d be the first to know,” he said, reports The Hill.

The two traveled to Florida together on Air Force One and according to White House Deputy Press Secretary Hogan Gidley, they spoke for “roughly 30 minutes.” Gidley also confirmed Rosenstein still had a job in the administration.

Disclosure of those conversations thrust Mr. Rosenstein’s future at the Justice Department into doubt. In the days following those revelations, … Mr. Rosenstein told senior White House officials, including John F. Kelly, Mr. Trump’s chief of staff, that he wished to resign.

But Mr. Rosenstein’s offer to quit came while the White House and the president were preoccupied with the fight to confirm Judge Brett M. Kavanaugh to the Supreme Court, and the White House delayed the discussion. (NYT)

Trump had previously said during a press conference at the United Nations General Assembly meeting last month that he did not wish to fire Rosenstein.

“We’ve had a good talk,” Trump said. “He says he never said it, he doesn’t believe it, he said he has a lot of respect for me, and he was very nice, and we’ll see.”