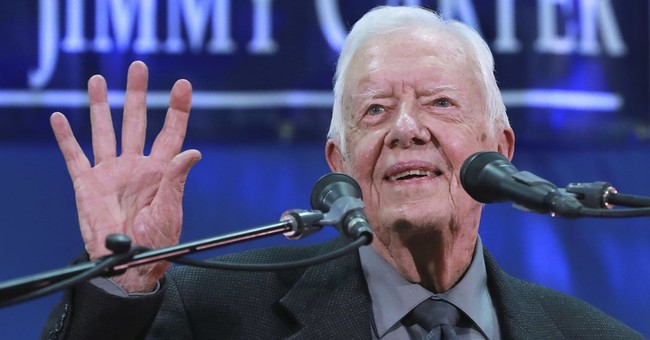 Former President Jimmy Carter warned Democrats against going too far to the left, which could risk pushing away support among independents.

“Independents need to know they can invest their vote in the Democratic Party,” Carter said Tuesday during his annual address at his post-presidential center and library in Atlanta, reports The Associated Press.

Instead, Democrats ought to focus on more moderate policies and steer clear of far-left programs like universal health care.

Carter, who voted for Sen. Bernie Sanders in the 2016 Democratic presidential primary, explained that progressives would not abandon their goals if they voted for a more moderate candidate. A Democrat would address their concerns, which wouldn’t be possible if they couldn’t win the election in the first place.

He also said progressive votes would not be lost by Democrats moving toward the center.

“I don’t think any Democrat is going to vote against a Democratic nominee,” he said.

There is some historical irony in Carter's analysis. He came to the White House in 1976 from the moderate wing of the Democratic Party, and he clashed with party liberals, drawing a spirited primary challenge in 1980 from Massachusetts Sen. Ted Kennedy. Carter prevailed, but he was wounded, abandoned by Kennedy's most liberal supporters and unable to win over independents who helped deliver a landslide for Republican Ronald Reagan. (AP)