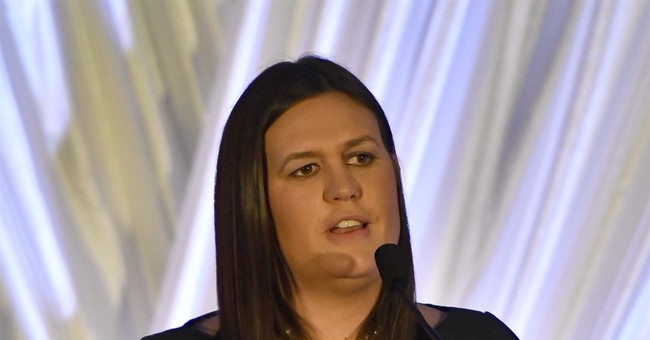 White House Press Secretary Sarah Huckabee Sanders released an official statement about The New York Times’s decision to publish an anonymous op-ed by an official within the White House, saying they “are disappointed, but not surprised.”

“Nearly 62 million people voted for President Donald J. Trump in 2016, earning him 306 Electoral College votes – versus 232 for his opponent. None of them voted for a gutless, anonymous source to the failing New York Times,” she said. “We are disappointed, but not surprised, that the paper chose to publish this pathetic, reckless, and selfish op-ed. This is a new low for the so-called “paper of record,” and it should issue an apology, just as it did after the election for its disastrous coverage of the Trump campaign. This is just another example of the liberal media’s concerted effort to discredit the President.”

Sanders went on the praise Trump’s accomplishments as president, noting that he’s fulfilled many of his campaign promises in less than two years, and called on the anonymous official to resign.

“The individual behind this piece has chosen to deceive, rather than support, the duly elected President of the United States,” she continued. “He is not putting country first, but putting himself and his ego ahead of the will of the American people. This coward should do the right thing and resign.”

In the op-ed, titled “I Am Part of the Resistance Inside the Trump Administration,” the anonymous staffer said “many of the senior officials in his own administration are working diligently from within to frustrate parts of [Trump’s] agenda and his worst inclinations.”

Trump blasted the “gutless” op-ed, questioned if the person was real, and if so, called on the paper to reveal the author as a matter of national security.