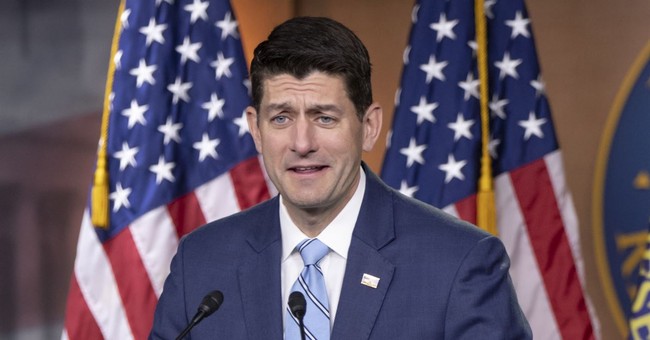 Speaker of the House Paul Ryan said his Democratic colleagues who’ve called to abolish Immigration and Customs Enforcement are "tripping over themselves" in their efforts to move even further left.

“They have really jumped the shark on the left,” he said, responding to a reporter’s question about the political ramifications of getting rid of the agency in some of his swing districts. “I think it’s [Rep. Mark] Pocan’s bill from Madison. You want to abolish the Immigration and Customs Enforcement Agency? This is the agency that gets gangs out of our communities, that helps prevent drugs from flowing into our schools, that rescues people from human trafficking. They want to get rid of this agency?”

.@ICEgov gets gangs out of our communities, helps prevent drugs from flowing into our schools, and rescues people from human trafficking. Some Democrats want to get rid of it? It's the craziest position. They are tripping over themselves to move further to the left. pic.twitter.com/B85SfNJXhR

Pocan, a Wisconsin Democrat, said last month he was introducing legislation to abolish the agency because it “can no longer accomplish its goals effectively” in the Trump administration.

“During my trip to the southern border, it was clear that ICE, and its actions of hunting down and tearing apart families, has wreaked havoc on far too many people,” Pocan said in a statement. “From conducting raids at garden centers and meatpacking plants, to breaking up families at churches and schools, ICE is tearing apart families and ripping at the moral fabric of our nation.”

Ryan called the movement to get rid of the agency, which is gaining steam on the left, “the craziest position I’ve ever seen.”

“They’re tripping over themselves to move too far to the left,” Ryan added. “They are out of the mainstream of America and that’s one of the reasons why I feel very good about this fall.”

Not surprisingly, when the GOP threatened to hold them to it by bringing the bill to the floor for a vote, the three Democratic lawmakers behind the legislation said they’d vote ‘no’.

“We know Speaker Ryan is not serious about passing our ‘Establishing a Humane Immigration Enforcement System Act,’ so members of Congress, advocacy groups, and impacted communities will not engage in this political stunt,” Reps. Mark Pocan (D-WI), Pramila Jayapal (D-WA), and Adriano Espaillat (D-NY) said in a statement. “If Speaker Ryan puts our bill on the floor, we plan to vote no and will instead use the opportunity to force an urgently needed and long-overdue conversation on the House floor.”