Entire Soccer Team and Coach Have Been Rescued From Thai Cave 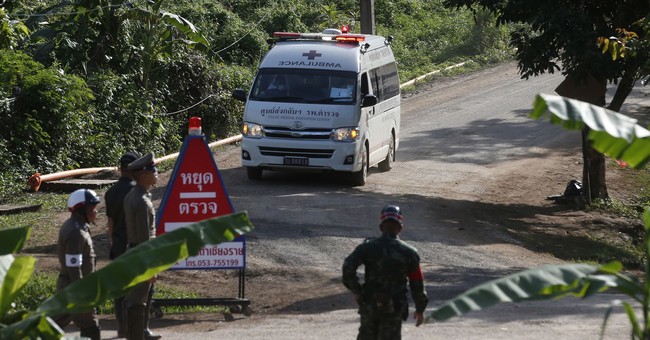 Good news out of Thailand this Tuesday morning—all 12 members of a soccer team and their coach have been rescued from a flooded cave where they were trapped for more than two weeks.

The rescue effort over the last few days has been slow and methodical, as each boy had to be taken out by two divers.

Over the weekend a former Navy SEAL likened the rescue mission to climbing Mt. Everest.

"People don't understand how much gear these guys have," Jake Zweig told “Fox & Friends.” "They’re not just swimming the whole time. They're climbing rocks, they're getting out and walking...There's a whole lot of stages to this mission just like climbing Mount Everest."

The Thai Navy SEALS posted the good news on Facebook and said only four members of the rescue team remain inside the cave.

Just returned from Cave 3. Mini-sub is ready if needed. It is made of rocket parts & named Wild Boar after kids’ soccer team. Leaving here in case it may be useful in the future. Thailand is so beautiful. pic.twitter.com/EHNh8ydaTT

The mission was not without a loss of life, however. One former Thai Navy SEAL died while delivering oxygen.

“It was sad news, a former SEAL who volunteered to help died last night,” Chiang Rai deputy governor Passakorn Boonyaluck told reporters last week. “His job was to deliver oxygen. He did not have enough on his way back.”