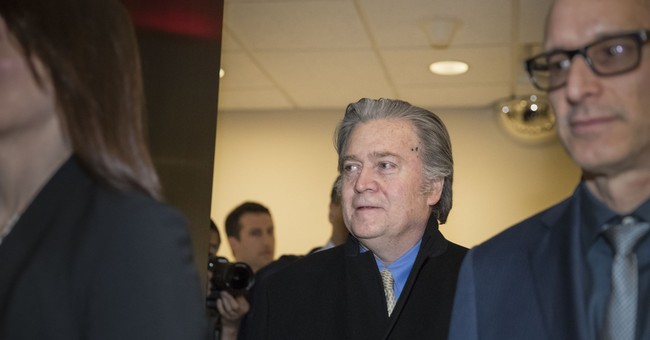 The harassment of Trump administration officials in public has become all too common, but it’s not just happening to current members of the administration. Steve Bannon, former White House chief strategist, was accosted while browsing in a Virginia book store, forcing the owner to call police.

According to Nick Cooke, the owner of Black Swan Books, Bannon was shopping, keeping to himself, when a woman began harassing him, calling the former Trump staffer “a piece of trash.”

“Steve Bannon was simply standing, looking at books, minding his own business,” Cooke told the Richmond Times-Dispatch. “I asked [the woman confronting Bannon] to leave, and she wouldn’t. And I said, ‘I’m going to call the police if you don’t,’ and I went to call the police and she left. And that’s the end of the story.”

Police never showed up, however, as the call was cancelled.

“We are a bookshop,” he added. “Bookshops are all about ideas and tolerating different opinions and not about verbally assaulting somebody, which is what was happening.”

But that’s not the end of the story.

A former Hillary Clinton aide posted the contact information of the Virginia bookstore.

A woman saw Steve Bannon in a VA book store. She took the opportunity to call him a “piece of trash.”

Reines defended his tweet after being criticized by some, arguing he did nothing wrong and only posted already publicly available information out of “convenience” should people want to contact the store.

I’m providing a service to the public by providing the contact information the bookstore posted on their website - presumably with the hope of being contacted. I presented facts w/o encouraging any behavior.

I’d point out through it’s possible this woman stopped a book burning. pic.twitter.com/ofDi2aA3tM