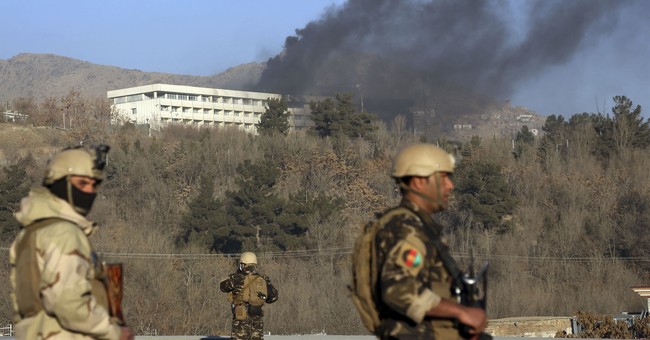 Several Americans were among those killed and injured in the attack on a luxury hotel in Kabul, Afghanistan on Saturday.

Twenty two people were left dead after Taliban militants stormed the hotel looking for foreigners, according to witnesses. The six jihadists were wearing suicide vests.

The State Department confirmed the American deaths but did not disclose exactly how many were killed.

“Sadly, we can confirm that Americans are among the victims,” spokeswoman Heather Nauert said in a statement. “We express our deepest condolences to our American families and to all the victims of the attack.”

But Afghan officials said at least three people with American citizenship were killed—“all of them either dual citizens or with family roots in Afghanistan,” the New York Times reported.

Roughly 160 people were rescued after Afghan troops regained control of the building after a 13-hour siege.

Six Taliban militants barged into the highly guarded Intercontinental hotelon Saturday night, fighting until noon on Sunday. At least 14 of their victims were foreign citizens, nine of them pilots and flight crew members from Ukraine and Venezuela who worked for a private Afghan airline, Kam Air. […]

Much of the hotel looks charred in photographs that have leaked out, and Afghan officials said many of the bodies were burned or in bad shape, making the identification process difficult. (NYT)

"The attack on the hotel, once again, shows the depravity of terrorists who seek to sow chaos," Nauert said.

"We are grateful for the bravery displayed by the Afghan National Defense and Security forces. Had it not been for their speedy recovery of the wounded, more lives may have been lost. We are in close contact with Afghan authorities regarding their investigation and stand firmly by the Afghan government."