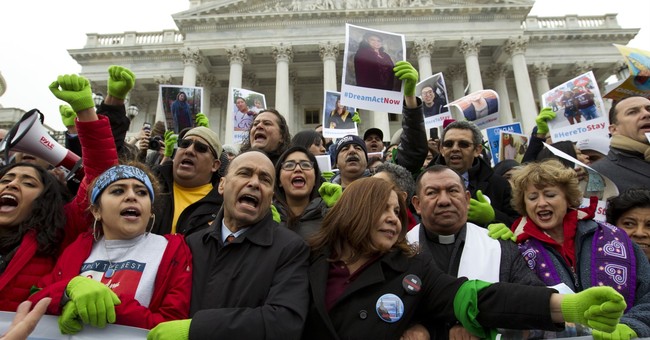 The Trump administration wants the Supreme Court to have the final say on President Trump’s decision to end the Deferred Action for Childhood Arrivals program.

The Justice Department late Thursday asked the court to hear its appeal of the 9th Circuit’s decision to block the administration from ending the Obama-era program.

DOJ attorneys argued in the 33-page appeal that waiting for the 9th Circuit Court of Appeals to hear the case and issue a ruling would take months, even if the case was on an expedited review. And doing so, they said would “require the government to retain in place a discretionary policy that sanctions the ongoing violation of federal law by more than half a million people.” (The Hill)

“Even if the losing party were to seek certiorari immediately following the 9th Circuit’s decision, this court would not be able to review the decision in the ordinary course until next Term at the earliest,” the appeal reads.

The move comes a week after a federal judge in San Francisco ruled that DACA must remain in place and individuals in the program must be allowed to renew their applications.

DOJ argued that former acting Secretary Elaine Duke’s September decision to rescind the DACA program was a “policy enforcement” decision that’s within the powers of a federal agency and can’t be reviewed under the Administrative Procedure Act (APA).

“Even if DHS’s prospective denial of deferred action were reviewable, the individual respondents could not obtain such review unless and until a final order of removal were entered against them,” they wrote.

“And even if it were reviewable now under the APA, the decision to rescind the DACA policy was not arbitrary and capricious. The Acting Secretary opted to wind down DACA after reasonably concluding that the policy was likely to be struck down by courts and indeed was unlawful.”

In a statement earlier this week, California Attorney General Xavier Becerra, who led the DACA lawsuit against the Trump administration, said he believes the injunction will be upheld.

“I am confident the appellate courts will see the logic and justice behind the district court’s issuance of the preliminary injunction against the termination of the DACA program,” he said.