Kim Jong Un Kicks Off New Year With Warning to US: 'Nuclear Button' Is On My Desk 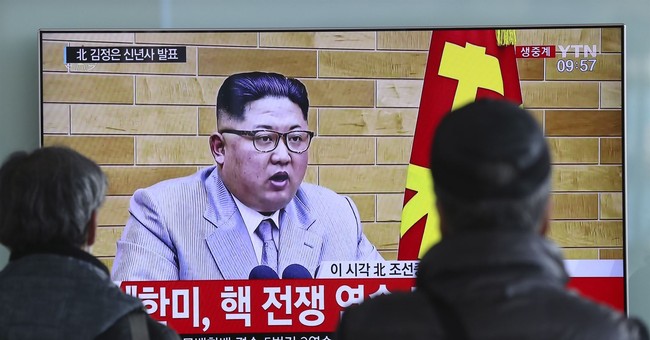 The new year has already brought a new threat from North Korea, with dictator Kim Jong Un warning the United States Monday that he has a “nuclear button” on his desk ready to use if the rogue regime is ever threatened.

“The entire United States is within range of our nuclear weapons, a nuclear button is always on my desk. This is reality, not a threat,” Kim said. “This year, we should focus on mass-producing nuclear warheads and ballistic missiles for operational deployment. These weapons will be used only if our society is threatened.”

Kim made the statement in a televised New Year’s Day address in which he declared North Korea “a peace-loving and responsible nuclear power,” while also calling for better relations with the South.

"When it comes to North-South relations, we should lower the military tensions on the Korean Peninsula to create a peaceful environment," he said. "Both the North and the South should make efforts."

Kim even suggested sending a delegation to the Winter Olympic Games, which will be held in Pyeongchang, South Korea.

"North Korea's participation in the Winter Games will be a good opportunity to showcase the national pride and we wish the Games will be a success. Officials from the two Koreas may urgently meet to discuss the possibility," Kim said.

"We have always stated our willingness to talk with North Korea anytime and anywhere if that would help restore inter-Korean relations and lead to peace on the Korean peninsula," a spokesman for the presidential Blue House said.

"We hope the two Koreas will sit down and find a solution to lower tensions and establish peace on the Korean peninsula."

When asked for comment on Kim’s speech at his New Year’s Eve celebration at Mar-a-Lago, President Trump only said “we’ll see, we’ll see.”