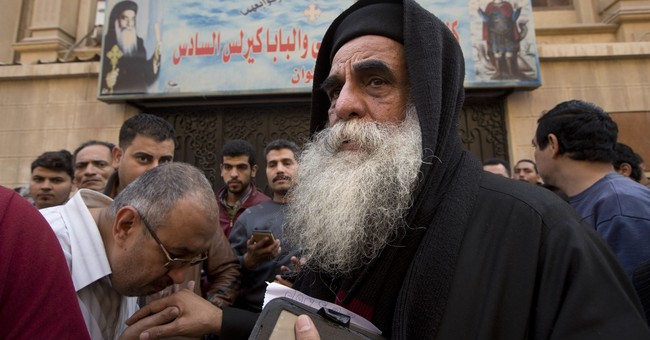 At least nine people were killed Friday when a terrorist opened fire on Coptic Christians outside a church near Cairo, Egypt.

The attacker was known to law enforcement, having been involved in other attacks over the last couple of years. In a statement released by the Ministry of the Interior, the gunman was described as a “well-known terrorist who participated in attacks on police men and civilians.”

The attack was carried out on Christians leaving the service at St. Mina Coptic Church in Helwan, south of the Egyptian capital. The terrorist tried to break through the security cordon, which was set up to protect the minority population ahead of their Christmas on January 7.

The assailant, who was injured in the gunfire exchange, had also opened fire at a nearby store before going to the church. He had an explosive device when he was arrested.

In total, eight Copts and a police officer were killed.

Egypt’s Coptic Christians, making up only 10 percent of the country’s population, have been the target of Islamic extremists for quite some time.

Here is a look at major attacks against Egypt's Coptic Christians in recent years:

December 29: A gunman on a motorcycle opens fire outside a church and at a store in a south Cairo suburb, killing at least eight Coptic Christians, and a policeman. The assault took place early Friday when the gunman tried to breach the church's security cordon. No group has claimed responsibility for the attack.

December 22: Hundreds of Muslim demonstrators attack an unlicensed church south of Cairo wounding three people. The incident took place after Friday prayers when demonstrators gathered outside the building and stormed it. The demonstrators chanted anti-Christian slogans and called for the church's demolition.

The demonstrators destroyed the church's fittings and assaulted Christians inside before security personnel dispersed them.

May 26: Masked militants riding in three SUVs open fire on a bus packed with Coptic Christians, including children, south of the capital Cairo, killing at least 28 people and wounding 22 others.

The assault occurs as the bus is traveling to the remote monastery of St. Samuel the Confessor in Maghagha, in Minya governorate.

No group immediately claims responsibility for the attack, the fourth to target Christians since December of the previous year, but it bears the hallmarks of the Islamic State group's local affiliate. The attack comes on the eve of the Muslim holy month of Ramadan.

April 9: Twin suicide bombings strike churches in the coastal city of Alexandria and the Nile Delta city of Tanta. At least 43 people are killed and scores of worshippers injured in the Palm Sunday attack, which narrowly missed a ceremony presided over by Pope Tawadros II in Alexandria's St. Mark's cathedral.

February: Hundreds of Egyptian Christians flee their homes in the northern part of the Sinai Peninsula, fearing attacks by Islamic State militants. The group's North Sinai affiliate had killed at least seven Coptic Christians in the restive peninsula in less than a month.

The Islamic State group affiliate releases a video vowing to step up attacks against Christians, describing them as their "favorite prey." It showcased a deadly December attack on the church adjacent to Cairo's Saint Mark's Cathedral.

December 2016: A bombing at a chapel adjacent to Egypt's main Coptic Christian cathedral in Cairo claimed by IS kills 30 people and wounds dozens during Sunday Mass in one of the deadliest attacks carried out against the religious minority in recent memory. The high death toll serves as a grim reminder of the difficulties of Egypt's struggle to restore security and stability after nearly six years of turmoil following the 2011 uprising.

July 2016: Pope Tawadros II says that since 2013 there have been 37 sectarian attacks on Christians in Egypt, nearly one incident per month. A Muslim mob stabs 27-year old Coptic Christian Fam Khalaf to death in the southern City of Minya over a personal feud.

May 2016: A Muslim mob ransacks and torches seven Christian homes in Minya after rumors spread that a Christian man had an affair with a Muslim woman. The elderly mother of the aforementioned man was stripped naked and dragged through a street by a mob to humiliate her.

New Year's Eve 2011: A bomb explodes in a Coptic Christian church in Alexandria as worshippers depart a midnight mass, killing more than 20 people. No suspects have been named and the case remains unresolved. Attacks pick up in the aftermath of Egypt's Arab Spring uprising that begins weeks later, then even more so after the army overthrows an elected but divisive Islamist president in 2013. (AP)

"The Presidency of the Republic reiterates that these desperate terrorist attempts will not undermine the resolve and the entrenched national unity of the Egyptian people, but will only increase their determination to continue on the path to eliminate terrorism and extremism from their country," a statement from his office reads.