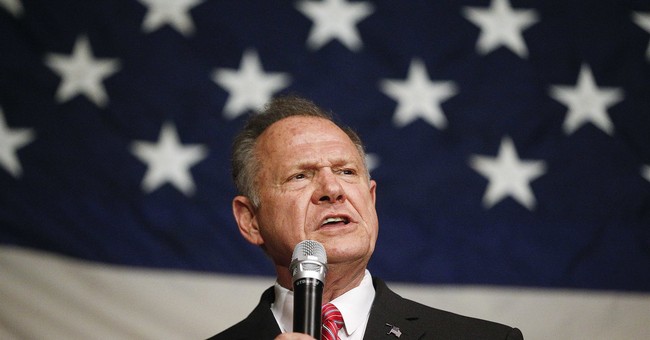 With voters set to head to the polls on Tuesday in Alabama’s Senate special election, Democrats are playing a last-minute race card against GOP candidate Roy Moore.

A mailer sent by Doug Jones, the Democratic nominee, compares Moore to former Gov. George Wallace (D), who was a segregationist.

“George Wallace fought to protect segregation,” the flyer, which was sent to black voters in the state, reads. “So did Roy Moore.”

Pictured on the mailer is a 1963 photograph of Wallace blocking black students from enrolling at the University of Alabama.

“As recently as 2004 he was fighting to keep racism the law in Alabama,” the flyer states. “Instead of working to move Alabama forward, Moore led the campaign against removing racist, outdated language from our state constitution that required segregation in Alabama schools.”

The mailer also says Moore “has ties to hate groups like the KKK” and has “repeatedly worked alongside racists and white supremacists who support his agenda.”

As for the first claim, AL.com explains:

“In 2004, Moore opposed proposed Amendment 2 to the Alabama Constitution, which would have stricken language mandating that schools be segregated and makes mention of poll taxes. He argued that the real motivation behind the amendment, which narrowly failed, was to increase funding for public schools, and therefore increase taxes, according to an October 2004 Birmingham News story. Moore also pointed out that the U.S. Supreme Court already declared segregation unconstitutional, making the amendment moot.”

As for the second charge, Moore has been supported in the past by several groups but there has been no direct involvement from Moore himself.

Moore is currently up by an average of 3.8 percentage points in the Alabama Senate special election, according to RealClearPolitics.