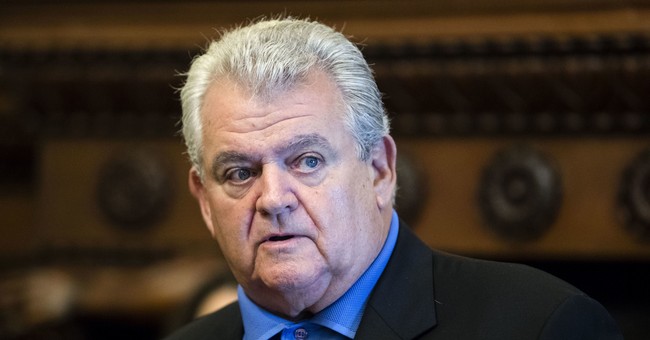 The FBI is investigating Democratic Rep. Robert Brady for leading a criminal conspiracy to hide a payment to his 2012 primary opponent to encourage him to drop out of the race.

The revelations about the $90,000 payment were in an approved search warrant affidavit, which was recently unsealed.

Two political consultants have already been charged in the campaign finance probe involving Brady's reelection campaign, but the recently unsealed search warrant application appears to be the first time Brady himself is mentioned as suspected of criminal wrongdoing in the probe. Federal prosecutors last month said Kenneth Smukler and Donald Jones planned a scheme for the Brady campaign to make an illicit $90,0000 campaign donation to Jimmie Moore, intended to pay down campaign debt.

The Pennsylvania Democrat could face potential charges including lying to the FBI, wire fraud, and making an illegal campaign contribution.

In the search warrant application, the special agent stated, "The investigation has uncovered evidence which indicates that Brady, Smuckler, and Jones utilized Smukler's and D.A. Jones' corporations to conceal payments from Brady's campaign to repay Moore campaign debts in exchange for Moore's agreements to withdraw from the 2012 Democratic primary race against Brady for U.S. Representative in Pennsylvania's 1st District. The evidence shows that these concealed payments were made for the purpose of removing Brady's primary opponent from the race and willfully undermining various provisions of the Federal Election Campaign Act (FECA) in the process."

The application continues: "As discussed in detail below, these goals were accomplished by routing three payments totaling $90,000 from Brady's campaign through political consulting companies to the campaign manager for Moore's campaign, who used a portion of the funds to pay debts owned by the Moore campaign, keeping the remainder of the money for herself and Moore.”

Brady has served in Congress since 1998 and is currently the top Democrat on the House Administration Committee.