Texas Church to Be Razed After Massacre 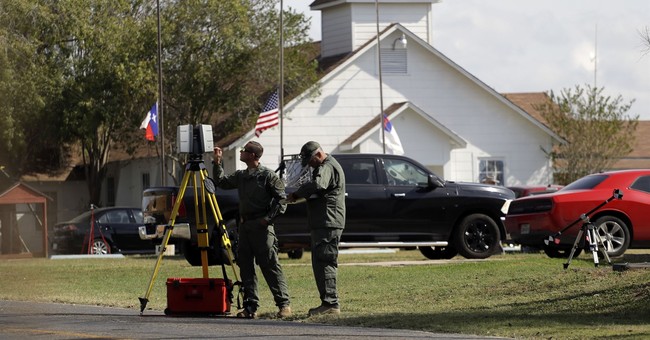 The First Baptist Church of Sutherland Springs, Texas, will be razed after Sunday’s mass shooting that killed 26 people and injured 20 others, its pastor told the Southern Baptist Convention Thursday.

"There's too many that do not want to go back in there," Pastor Frank Pomeroy told The Wall Street Journal. Pomeroy’s 14-year-old daughter, Annabelle, died in the shooting.

"The pastor expressed his desire that perhaps the best way forward is to have the church demolished and replaced with a prayer garden," convention spokesman Roger "Sing" Oldham, said, reports USA Today, adding that parishioners haven't "had a chance to fully deal with the grief and then come together to make a decision."

Oldham explained the church would be “too stark of a reminder” of the massacre.

Charlene Uhl, mother of 16-year-old Haley Krueger, who died in the attack, agreed that the church should come down.

There should still be a church “but not here,” she said Thursday as she visited a row of white crosses commemorating the victims in front of the building. She said her daughter attended worship services and a weekly Thursday night youth group meeting held by another victim, Karla Holcombe.

Jeannie Brown, visiting from Indiana, stopped at the site with her daughter, who used to live in Sutherland Springs but left decades ago for San Antonio.

Asked whether the church should be destroyed, Brown said: “Yes. Who would want to go back in there? But then if it is destroyed, does that mean he (the gunman) won?” (AP)

Razing the building would be in line with what has happened to the sites of other mass shootings.

Sandy Hook Elementary in Newtown, Connecticut was demolished after shooter Adam Lanza killed 20 children and six adults in December of 2012.

Additionally, in 2006, a schoolhouse near Lancaster, Pennsylvania was razed after a gunman killed five girls and wounded several others.

Share this on Facebook
Tweet
U.S. Officials Alerted to 'Imminent Radiological Threat' at Chinese Nuclear Plant
Spencer Brown
As Pentagon Is Transformed by Woke Left, Here's What Replaced a Military History Lesson for Some US Marines
Matt Vespa
'Unredacted with Kurt Schlichter': Ron DeSantis or Donald Trump? We Need Who Can Win