Trump: 'I Don't Blame' China for 'Unfair' Trade Practices With US 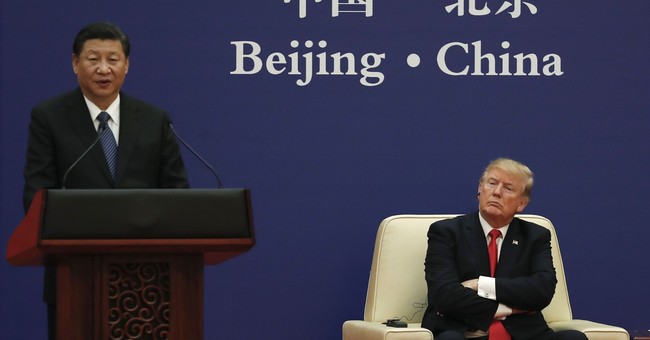 President Trump on Thursday changed his tune on who’s to blame for China’s unfair trade practices with the United States.

After repeatedly slamming Beijing for taking advantage of America, Trump eventually praised them for their practices.

The trade relationship "between China and the U.S. has not been a very fair one, as we all know America has a huge annual trade deficit with China, a number beyond anything that anyone would understand," Trump said. "Both the United States and China will have a more prosperous future if we can achieve a more level playing field."

But he didn’t focus on President Xi Jinping for the current situation.

"After all, who can blame a country for being able to take advantage of another country for the benefit of its citizens. I give China great credit, but in actuality I do blame past administrations for allowing this out-of-control trade deficit to take place," Trump said.

After their talks, both leaders released conciliatory statements about U.S.-China ties.

"We want a vibrant trade relationship with China," Trump said. "We also want a fair and reciprocal one. Today, I discussed with President Xi the chronic imbalance in our relationship as it pertains to trade and the concrete steps it will take to solve the problem of massive trade distortion."

Xi, on the other hand, said the differences between the two countries could be resolved.

"As two distinctive countries our two sides may have different views or differences on some issues. This is natural," Xi said. "They key is to properly handle and manage them."

"The Pacific Ocean is big enough to accommodate both China and the United States," Xi added.