Report: US Getting Ready to Put Nuclear Bombers Back on 24-hour Alert 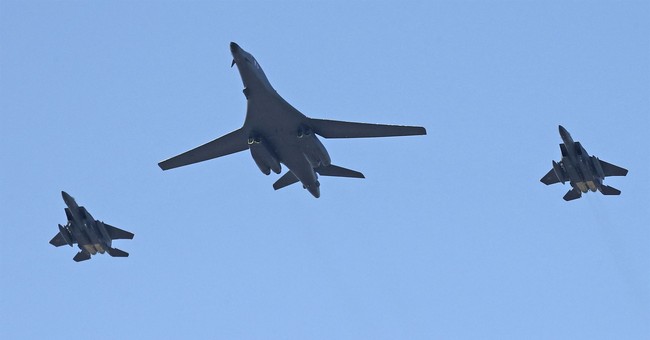 The Air Force is on high alert as tensions with North Korea continue to escalate. According to a report in Defense One, the U.S. is preparing to put a fleet of nuclear-armed B-52 bombers on 24-hour alert. The U.S. has not had to do this since 1991.

The move should not be seen as the armed forces gearing up for a specific attack, Air Force Chief of Staff Gen. David Goldfein told Defense One.

“This is yet one more step in ensuring that we’re prepared,” he said. “I look at it more as not planning for any specific event, but more for the reality of the global situation we find ourselves in and how we ensure we’re prepared going forward.”

Goldfein and other senior defense officials stressed that the alert order had not been given, but that preparations were under way in anticipation that it might come. That decision would be made by Gen. John Hyten, the commander of U.S. Strategic Command, or Gen. Lori Robinson, the head of U.S. Northern Command. STRATCOM is in charge of the military’s nuclear forces and NORTHCOM is in charge of defending North America.

Putting the B-52s back on alert is just one of many decisions facing the Air Force as the U.S. military responds to a changing geopolitical environment that includes North Korea’s rapidly advancing nuclear arsenal, President Trump’s confrontational approach to Pyongyang, and Russia’s increasingly potent and active armed forces. (Defense One)

“The world is a dangerous place and we’ve got folks that are talking openly about use of nuclear weapons,” he said, reports Defense One. “It’s no longer a bipolar world where it’s just us and the Soviet Union. We’ve got other players out there who have nuclear capability. It’s never been more important to make sure that we get this mission right.”

With the Cold War decades behind us, Goldfein urged the Air Force to envision news ways of using bombers, ICBMs, and nuclear cruise missiles.

“I’ve challenged…Air Force Global Strike Command to help lead the dialog, help with this discussion about ‘What does conventional conflict look like with a nuclear element?’ and ‘Do we respond as a global force if that were to occur?’ and ‘What are the options?’” he told Defense One. “How do we think about it — how do we think about deterrence in that environment?”