Here's How Much Money Former Presidents Raised for Hurricane Victims 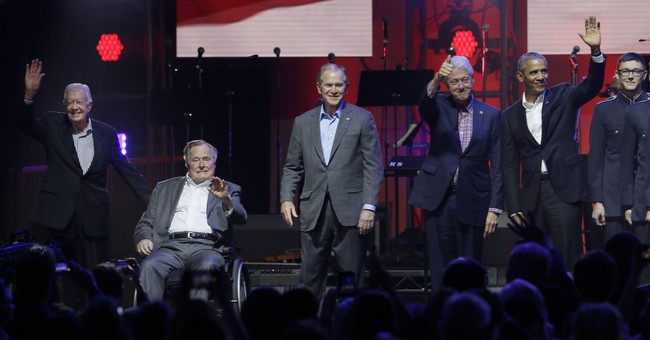 The One America Appeal campaign sought to help Americans affected in the U.S. mainland and Caribbean islands recover from one of the worst hurricane seasons in recent history.

To date, the fundraising effort raised $31 million in “tax-deductible, private funds from over 80,000,” according a press release, which thanked donors for their contributions.

David Jones, the CEO of the George H.W. Bush Presidential Library Foundation, said the donations will help with the significant cost of rebuilding.

“With damage estimates from Hurricanes Harvey, Irma and Maria topping $300 billion and requiring months and years of rebuilding ahead, we hope this strong start to the One America Appeal is just that — a start,” he said in a statement. “The former presidents want to thank each donor who, out of the goodness of their hearts, has given of themselves in such a selfless way to help their fellow Americans.”

The announcement was made ahead of the campaign's benefit concert at Texas A&M’s Reed Arena, which featured artists Alabama, Lady Gaga, the Gatlin Brothers, and Robert Earl Keene, among others.

President Trump, who was not able to attend, shared a message through a video recording.

“There is a lot of work ahead of us,” he said. “Together we will recover. We will rebuild. And we will come back stronger and better than ever before.”