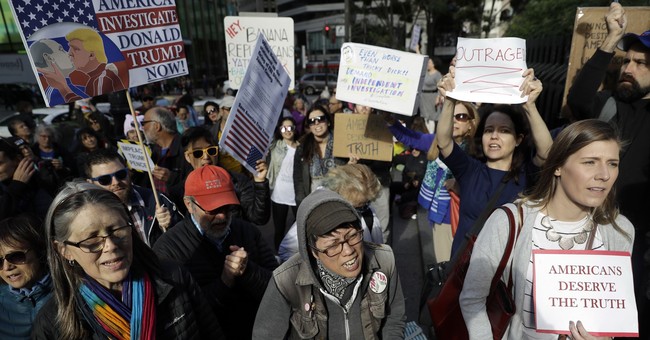 In case you missed it, a group of protesters started a 10-day march from Charlottesville, Virginia to Washington, D.C., on Monday to “confront White Supremacy.”

The marchers also want President Trump to be removed from office.

“For years, white supremacist violence, rhetoric, and policies have escalated and intensified – exploding during Donald Trump’s run for president and reaching a boiling point in Charlottesville, as courageous people of moral conscience stood up to an army of white nationalists, neo-Nazis, and members of the KKK,” the march’s website stated.

“This is the time for us to stand up for justice and equality. This is the time to confront white supremacy in our government and throughout our history. We demand that President Trump to be removed from office for allying himself with this ideology of hate and we demand an agenda that repairs the damage it's done to our country and its people.”

When the march began earlier this week roughly 200 people took part, according to the group. But, it turns out not very many people were really committed to ‘confronting white supremacy’ since by the next day, it had lost almost all of its marchers.

“Over 200 people came together today to take a stand against bigotry and hate,” march organizers said on Twitter when the event kicked off. “We’re marching from #Cville2DC. Join us: cville2dc.us.”

Over 200 people came together today to take a stand against bigotry & hate. We're marching from #Cville2DC. Join us: https://t.co/YzEarvvr1D pic.twitter.com/CZ8KXP6jpI

By Tuesday, the number went down to 35.

“We have started the day!” the group tweeted. “We have about 35 folks marching against white supremacy.”

We have started the day! We have about 35 folks marching against white supremacy#Cville2DC pic.twitter.com/tXLKQ0s6Mc

As Trump would say: Sad!