Mayor of Venice: We'll Send Any Terrorists 'Straight to Allah Before They Can Do Any Damage' 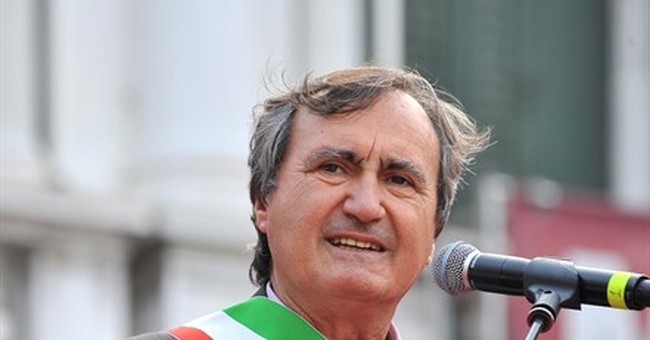 The mayor of Venice vowed to send any would-be terrorists “straight to Allah” if they so much as shouted “Allahu Akbar” in the city.

Mayor Luigi Brugnaro’s comments come after terror attacks rocked Barcelona and Cambrils, where 15 people were killed after a terrorist rammed a van through a crowded street in the former, and a similar attack was attempted in the latter.

Brugnaro said his city’s aggressive approach to combating terrorism has made Venice safer than cities like Barcelona.

“In contrast with Barcelona, where they had not set up protection, we keep our guard up,” Burgnaro said, reports The Daily Caller. “If anyone runs into St Mark’s Square shouting ‘Allahu Akhbar’, we will take him down. A year ago I said after four steps, now after three. I will say it in Venetian: ‘Ghe Sparemo’ (We will shoot him).”

He added: "We will continue to increase it because we must make the city and its citizens feel that we are there, that we are able to react."

He pointed to the arrest of four terrorists from Kosovo in March who allegedly planned to blow up a bridge as Venice’s tough stance paying off.

“In Venice, we arrested four terrorists who wanted to blow up the Rialto bridge, saying they wanted to go to Allah. But we’ll send them straight to Allah before they can do any damage,” Brugnaro said.

Other politicians have mocked Brugnaro, with the Mayor of Florence Dario Nardella coming up to him after his speech yelling “Allahu Akbar" as a joke.

Brugnaro is unapologetic over his stance toward terrorism, however.

“I have never been politically correct, I am incorrect,” Bruganaro said.

Nardella was later forced to apologize.

“I’m sorry for certain remarks which were caught on video and published online,” he said.

“It was not my intention to offend anybody, least of all the Muslim community. I did not intend to joke about their religion, nor evoke the tragic events of recent days.”