Cornyn: Many of Our Colleagues Still Don't Accept That Trump Won the Election 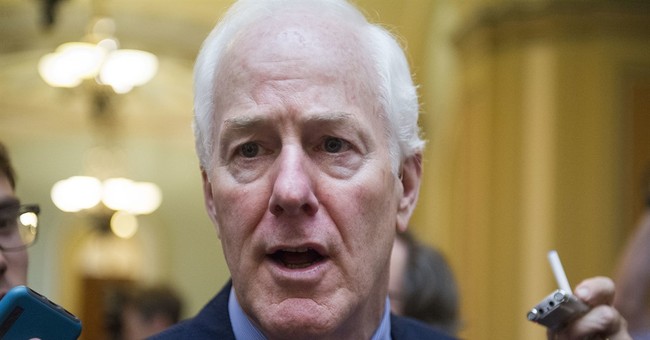 Sen. John Cornyn took to the Senate floor Wednesday to talk about the backlog of President Trump’s executive nominations, saying he’s “never seen anything quite like it.”

As Cortney reported last month, if the current pace continues, it would take 11 years for all of the president’s nominees to be confirmed—long after he’d be out of office even if he did get a second term.

"We had an election on November 8, but for many of our colleagues, the election remains undecided. They don't accept the verdict of the American people, the Electoral College, that President Trump won the election. Hillary Clinton lost," Cornyn said.

"And that's how they somehow justify their consistent foot dragging and obstruction when it comes to the president's nominees for important offices, including his Cabinet," he continued. "It's the president's prerogative to nominate who he wants to serve in the executive branch, but it's our duty, our responsibility to carefully consider their qualifications before coming together to confirm them."

Cornyn went on to note that despite nearly unanimous votes in the Senate, some individuals are still waiting to be confirmed.

"If they were truly controversial, I think it would be reflected in the vote for their confirmation, but they're not," Cornyn said, pointing to former Sen. Kay Bailey Hutchinson as an example.

"Our former colleague Kay Bailey Hutchison, who has been nominated to serve as the ambassador to NATO. I can't think of a more qualified person than my good friend, the former senator from Texas. Our country needs leadership in Brussels at NATO to help counter Russian aggression and threats and intimidation against our allies in the region. But that's just one example," Cornyn said.

He then called out his Democratic colleagues, telling them it’s time to move on from the election and govern.