Here's Video of the First Handshake Between Trump and Putin 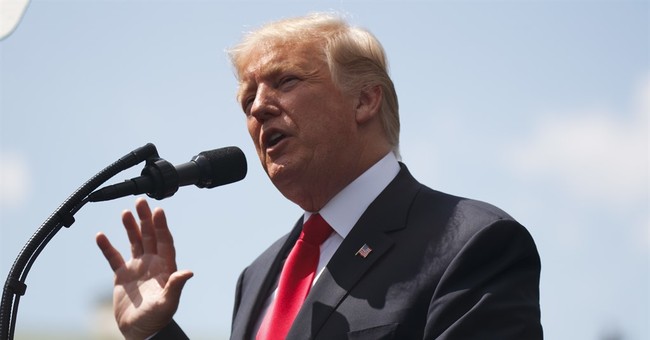 The German government posted video of world leaders meeting at the G20 summit in Hamburg, including footage of President Trump and Russian President Vladimir Putin meeting for the first time.

Earlier in the day Trump tweeted that he was looking forward to meeting "all meetings today with world leaders, including my meeting with Vladimir Putin. Much to discuss."

The two will talk face to face for a bilateral meeting later Friday.

Trump and Putin were set to participate later Friday morning in a bilateral talk at the G-20 summit in Hamburg, Germany. Given the controversy surrounding alleged Russian meddling in the U.S. presidential election and Democrats' efforts to tie Trump to Putin, the first meeting between the men is being closely watched. [...]

The Trump-Putin powwow comes amid shifting Trump rhetoric, as the president has begun taking a harder line with Russia. Trump was complimentary of Putin as recently as the October presidential debates, and during the election he often said he hoped the U.S. and Russia could improve relations.

But since assuming office Trump's optimism has waned, and he's criticized Russia for its unflinching support of Syrian leader Bashar Assad, even as he used chemical weapons. The U.S. also incurred Russian ire by agreeing to sell patriot missiles to Poland, and in a highly praised speech in Warsaw on Thursday, Trump specifically called out Russia for its subversive activities worldwide. (Fox News)

Their meeting between Trump and Putin will be 35 minutes and include Secretary of State Rex Tillerson and an interpreter.

Trump said Friday on Twitter that he "will represent our country well and fight for its interests! Fake News Media will never cover me accurately but who cares! We will #MAGA!"