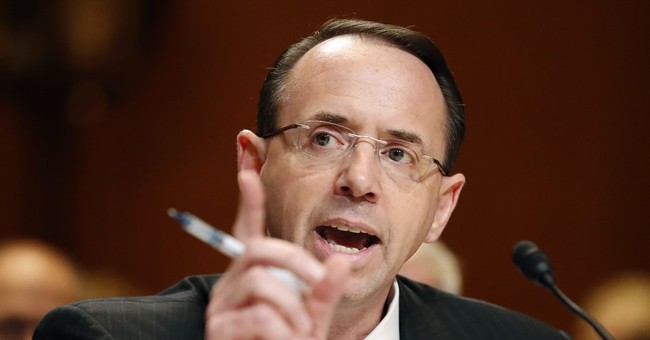 "Americans should exercise caution before accepting as true any stories attributed to anonymous 'officials,'" Rosenstein said in a statement, "particularly when they do not identify the country — let alone the branch or agency of government — with which the alleged sources supposedly are affiliated. Americans should be skeptical about anonymous allegations. The Department of Justice has a long established policy to neither confirm nor deny such allegations."

The warning comes after the Washington Post reported that the special counsel is investigating the president for possible obstruction of justice. Another report from the Post also claimed the president’s son-in-law and aide Jared Kushner’s finances and business dealings were under close examination. Both stories cited unnamed officials.

Mark Corallo, a spokesman for Trump's personal lawyer, responded Wednesday to the Post’s report saying: "The FBI leak of information regarding the president is outrageous, inexcusable and illegal," according to FoxNews.com.

“They made up a phony collusion with the Russians story, found zero proof, so now they go for obstruction of justice on the phony story. Nice,” he tweeted.

“You are witnessing the single greatest WITCH HUNT in American political history – led by some very bad and conflicted people! #MAGA” he followed up.

The president also made comparisons to how he was treated versus Hillary Clinton.

“Why is that Hillary Clintons family and Dems dealings with Russia are not looked at, but my non-dealings are?” he wrote Thursday afternoon.