Canine Heroes of the Korean War 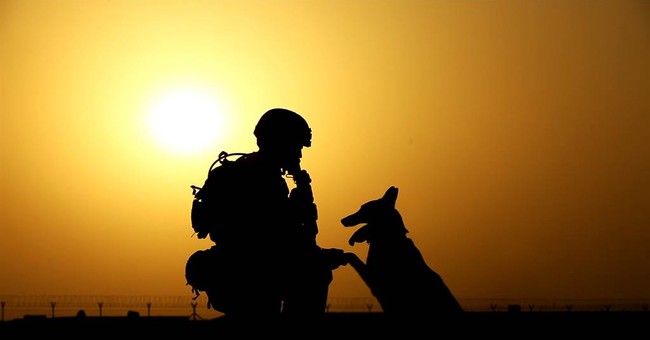 Editor's note: This post has been updated with additional photos.

The American public had largely turned their backs on the Korean War, and on the soldiers who served in combat upon their return home. But there’s one other element of the Forgotten War that’s been relegated to the footnotes of history—the conflict’s war dogs. Thanks to J. Rachel Reed, however, the stories of loyalty, heroism, love, and loss between dogs and their handlers during the Korean War have been resurrected in “K-9 Korea: The Untold Story of America’s War Dogs in the Korean War.”

Tell me about your background and what got you interested in military working dogs.

I was doing an internship at a World War II archives library in Lexington, Virginia, and part of my job there, I was taking oral histories from veterans and while I was there I took an oral history from a veteran who had the most incredible story about his time in North Africa during World War II and how he had picked up a dog there, and as he recounted the story to me he was in tears basically because he had to separate from the dog when he went home and it just got me thinking, it got me interested. As people who love dogs, we can understand the bond that men and dogs have, but when you’re talking about the bond between a soldier and a dog, especially in times of war and how invaluable that is, it fascinated me. So I wanted to learn more. I started doing research … about the role of dogs in war. Not just military working dogs but companion dogs … and I found there was not a lot written about the role of dogs in the Korean War, so I put a call out to the Korean War Veterans Association and asked for stories and when I did I just got an overwhelming response from veterans who had served with or who had loved a dog in Korea, and as I continued to do my research I came across a blurb in a small Colorado newspaper about the 8125th Sentry Dog Detachment in Korea having their annual reunion. [After tracking down one of the veterans, she was invited to a reunion]. He said to me, ‘Why don’t you come and listen to us tell our old stories?’ So, I did, and the rest was history.

You talked a lot about how these dogs were classified as equipment, and how they were treated as such by military bureaucracy, which is so much different than how they’re viewed today. They get injured on the battlefield now and they’ll get medevaced, for example. But reading some of the passages in this book were really heartbreaking, like the dog that was electrocuted for its aggressive behavior, even though it had had a handler who was perfectly capable of working with the dog. So, can you explain to our readers what you see has changed regarding the military’s attitudes towards dogs? And also, despite many of the dogs’ tragic or unknown fates after the conflict ended, what you’re hoping people take away from the book?

It’s been a complete turnaround in attitude but I would say that’s due in large part to the handlers that experienced the loss in Vietnam especially [where, like in North Korea, the dogs were left behind], coming home and spending the rest of their lives making the military accountable for their actions. It comes to mind, Mr. John Burnam, the national monument to military working dogs and handlers was named after, he made it his life pursuit to make sure that these dogs were honored and remembered as they should be, and then he went a step further and many others did as well in reaching out to the world and saying, 'look this tragedy occurred and we can’t ever allow it to happen again.' So I think social media has played a huge role in bringing the stories to light, and making people aware of what happened, and now, as a result, the U.S. military has to be accountable because there’s an ever-watchful eye on them.

What I most desire that people take from this book is I want them to be aware of the men and the dogs and the sacrifice that they gave, it was something that affected them for the rest of their lives. You had a group of veterans that came home from the war and there was no fanfare, there were no parades, a lot of times their service wasn’t even acknowledged, so this happened to the men, on top of them having to leave behind their most trusted and beloved companion and friend. It was traumatizing. We talk about PTSD, there was at least that if not more for these men, and the horrible outcome that a lot of those dogs most certainly faced as well, so I want to honor these veterans, both four legged and two legged, I want their stories to be known and for the world to look at them and appreciate the sacrifice they made.

What was your favorite story in the book, if there is just one?

Well I love them all but I will say what immediately comes to mind is the story of Fickes and the stray dog that he took in named Katie. Katie was a stray, looking for comfort, obviously, for safety, because she was viewed as a potential meal outside the gate’s perimeter. So she wandered on to the post and one of the men, Benevenga, actually took up with Katie first, fed her, let her sleep under his bunk. But then Benevenga was injured, and when he was injured he asked his best friend Fickes to watch over Katie, so Fickes did, and took it a step further. His canine was one of the dogs that had probably been a pet and very docile before it came into the program, and so it wasn’t very aggressive, they were bonded in a friendly sort of way, but not in the role that he needed that dog to be a lot of times, so he decided he was going to take Katie the stray and train her to be a sentry dog. And he did, and she was the most effective sentry dog that he ever worked with. She absolutely was devoted to him, she could follow him off leash, and did follow him everywhere he went, and when they walked the perimeter, Katie was alert, and Katie protected him and Katie protected him more than once. The tragedy of course in the end...

Yeah, that was terrible.

Yeah, we don’t want to talk about that. But he loved Katie and he still talks about Katie with tears in his eyes today. He absolutely loved that dog.

Is there anything else you’d like our readers to know about the book I haven’t asked you about?

Just as long as they know that this is a story that yes, although it’s tragic in many ways, there is one really beautiful redeeming story in the end, well I guess two you could say. One, the dog—blind Sam that went to the orphanage—and two, that, well, I don’t know if I want to give that away, and two—that the men finally found some comfort and some peace in each other and hopefully they will through the book as well.

Photo courtesy of Regnery History.
What Virginia Schools Will Be Changing About Math Curriculum...All in the Name of Equity
Leah Barkoukis
Chauvin Trial Juror Says She Feared Intimidation at Her Home, Riots If Verdict Wasn't Accepted
Katie Pavlich
CNN's Lemon and Cuomo Aren't Backing Down From Their Sensible Take on Ohio Shooting
Matt Vespa