Dem Rep Who Met With Assad: He Should Be Executed If Behind Chemical Attack...But US Responded 'Recklessly' 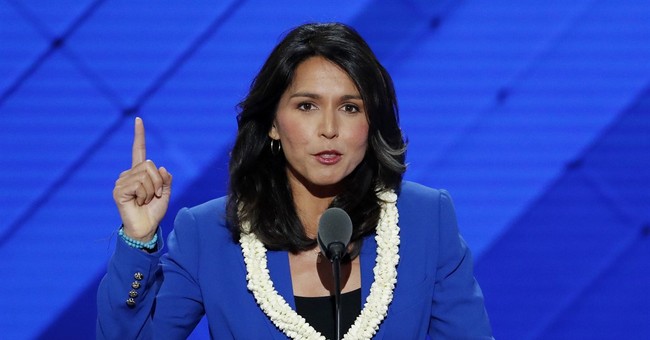 Rep. Tulsi Gabbard (D-HI), who got a lot of heat from her colleagues on Capitol Hill for meeting with Syrian President Bashar al-Assad this year, said she would call for his “prosecution and execution” if it’s proven he’s behind the chemical attack that killed at least 100 people Tuesday.

Nevertheless, she was highly critical of the United States’ response.

"This administration has acted recklessly without care or consideration of the dire consequences of the United States attack on Syria without waiting for the collection of evidence from the scene of the chemical poisoning," she said in a statement.

“It angers and saddens me that President Trump has taken the advice of war hawks and escalated our illegal regime change war to overthrow the Syrian government. This escalation is short-sighted and will lead to more dead civilians, more refugees, the strengthening of al-Qaeda and other terrorists, and a possible nuclear war between the United States and Russia."

President Trump ordered the launch of 59 Tomahawk missiles against a Syrian airfield in retaliation for the chemical attack—a move that was widely hailed by lawmakers and international leaders.