Despite DOJ Request to Resign, US Attorney Bharara Refuses to Step Down 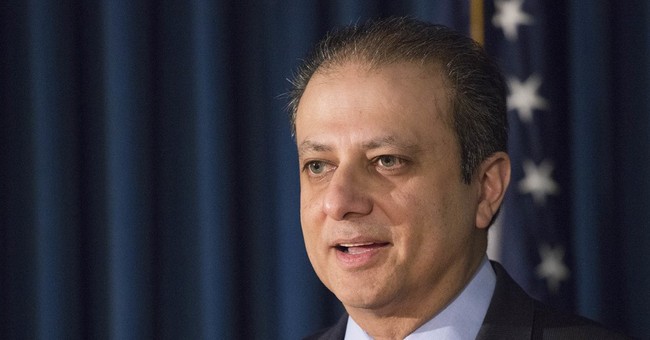 While most of the Obama-appointed U.S. attorneys had already left the Department of Justice, U.S. Attorney General Jeff Sessions requested on Friday that the 46 who remained submit their resignations, which is standard practice during transitions. According to multiple reports, however, Preet Bharara, the U.S. attorney for the Southern District of New York, is refusing to step down.

"HOLDOVER: Bharara is not submitting his resignation, according to several ppl briefed - WH not responding to what they'll do next," Maggie Haberman of The New York Times tweeted Saturday.

CNN’s Jake Tapper reported that then President-elect Donald Trump met with Bharara in November and had asked him to stay on board. Thus, Friday’s request to resign blindsided him.

By refusing to step down, Trump will be forced to fire him in a “public standoff,” CNN reports.

The move was applauded by Brian Kolb, the New York State Assembly's Republican leader, who tweeted, “Good for Preet, he is doing the job he was appointed to do!”