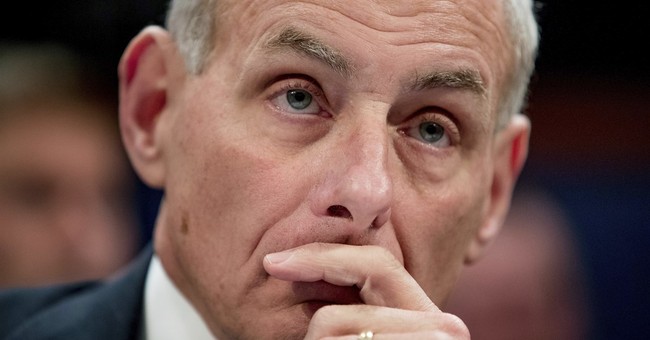 Department of Homeland Security Secretary John Kelly went on the record Tuesday to say that a Washington Post report about a confrontation between him and White House chief political strategist Steve Bannon was completely false.

White House chief strategist Stephen K. Bannon wanted to stop Kelly in his tracks and told him not to issue the order. Kelly, according to two administration officials familiar with the confrontation, refused to comply. That was the beginning of a weekend of negotiations among senior Trump administration staffers that led, on Sunday, Jan. 29, to a White House decision to change the process for the issuance of executive orders.

The disagreement between Bannon and Kelly pitted a political operator against a military disciplinarian. Two administration officials gave the following account of their exchange: Respectfully but firmly, the retired general told Bannon that despite his high position in the White House and close relationship with President Trump, the former Breitbart chief was not in Kelly’s chain of command. If the president wanted Kelly to back off from issuing the waiver, Kelly would have to hear it from the president directly, he told Bannon.

Even though the White House refuted the claim, prompting the editor to update the piece, Congresswoman Kathleen Rice decided to ask Kelly about the report during a hearing Tuesday.

In essence, the story amounted to fake news.

“Every paragraph, every sentence, every word, every space, every comma, ever period is wrong. It was a fantasy story,” Kelly responded.

If Rogin didn’t make the story up, he added, then “whoever his sources are are playing him for a fool.”

Police Release Body Camera Footage of Officer-Involved Shooting That Set Off Riots
Townhall
WaPo's Aaron Blake is just appalled that John Cornyn would make the kind of 'baseless and ugly innuendo' about Joe Biden that Aaron Blake made about Donald Trump
Twitchy
Buyer's Remorse Sets in as Sen. Warnock Makes Stunning Admission About Prior Statement on GA Voting Law
Redstate
Insanity Wrap #185: One of Our Vice Presidents Is Missing!
PJ Media