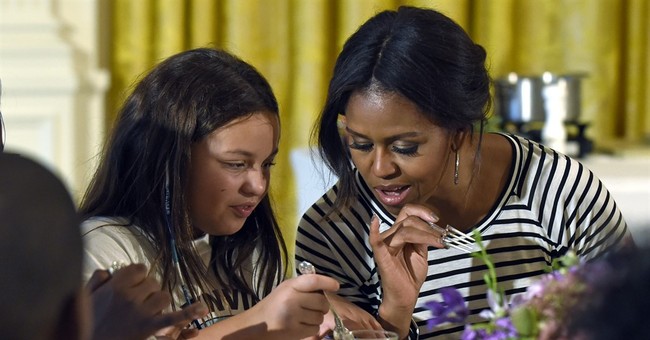 While Michelle Obama’s healthy school lunch program was nice in theory, it ended up being widely unpopular among schoolchildren, costly, and extremely wasteful.

That’s why Rep. Mark Meadows has called for repealing portions of the Healthy Hunger-Free Kids Act of 2010, which is what helped turn Obama’s signature program into law.

The initiative is part of a document put forth by Meadows that calls on the Trump administration to reverse roughly 200 rules and regulations, including segments of the school lunch program.

It’s been widely documented that children are not eating what they’re forced to put on their plates, leading to such massive amounts of food waste that some school districts have resorted to feeding pigs at nearby farms the leftovers. This has led to an estimated 1.2 million students dropping out of the program altogether.

Since 2012, the U.S. Department of Agriculture has implemented the requirement – tied to the 2010 law – that schools include either a fruit or vegetable for lunches subsidized by the federal government. However, a report published in August 2015 by researchers at the University of Vermont found even though students added more fruits and vegetables to their plates, “children consumed fewer [fruits and vegetables] and wasted more during the school year immediately following implementation of the USDA rule.”

Titled “Impact of the National School Lunch Program on Fruit and Vegetable Selection,” the report noted that average waste increased from a quarter cup to more than one-third of a cup per tray. Observing students at two northeastern elementary schools during more than 20 visits to each, researchers took photos of students’ trays after they chose their items, as they were exiting the lunch line and again as they went by the garbage cans.

But it’s not just unpopular among students—it was burdensome and costly to implement for schools given the complicated rules and restrictions on fat, sugar, sodium, fruits, vegetables, calories, and whole grains. Some school districts even had to leave the program because the compliance costs were greater than the federal subsidies they received.