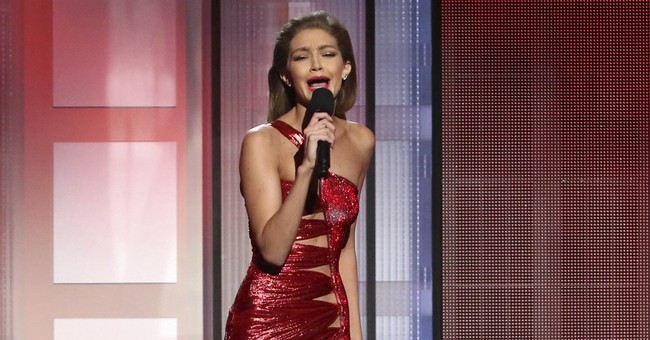 In the beginning of the American Music Awards co-host Jay Pharoah promised that “tonight it’s all about the music.” Except it didn’t turn out that way.

The two were quick to mock President-elect Donald Trump and his wife, Melania, going so far as to impersonate them both.

"I love my husband President Barack Obama and our children Sasha and Malia," co-host Gigi Hadid said with an eastern European accent, lips pouted, and eyes narrowed, mocking Melania for plagiarizing parts of her RNC speech from Michelle Obama.

Then Pharoah followed up.

"I love Bruno Mars. I don't know what color he is, so I can't deport him," he said. "I mean, everyone, look, he looks like Mowgli from The Jungle Book. He does. Listen, everyone, I love 'Uptown Funk,' it was all totally about me. It was originally called 'Uptown Trump.' Listen, I'm going to funk this country up bigly."

The political comments cooled for the next couple of hours, but when Mark Cuban and Idina Menzel took the stage to present an award, they both took shots at Trump. Cuban, a vocal Hillary Clinton supporter, said he was looking forward to "not being invited to the inauguration." In response, Menzel alluded to Trump's tweets about the cast ofHamilton's speech to Vice President-elect Mike Pence, saying, "Us unsafe, scary theater people wouldn't be invited to the inauguration either. I love youHamilton!"

Green Day also blasted Trump during their performance of "Bang Bang," chanting, "No Trump, no KKK, no fascist USA."

Let Them Destroy Each Other
Townhall
Another brutal poll for Biden has to be setting off alarms at the WH
Twitchy
AOC Starts Crying as the Lunatics Come Out to Play During the Iron Dome Funding Vote
Redstate
Latest Durham Indictment May Make Russiagate the Most Corrupt Scandal in U.S. History
PJ Media