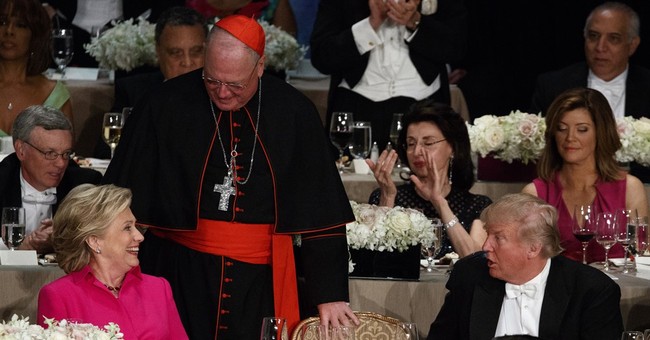 Hillary Clinton and Donald Trump traded barbs Thursday night at the Alfred E. Smith Memorial Foundation Dinner, but there were a few “touching moments” between them, Cardinal Dolan revealed.

“After the little prayer, Trump turned to Clinton and said, ‘You are one tough and talented woman,’” Dolan said in an interview with NBC News. "[Trump] said, 'This has been a good experience, this whole campaign, as tough as it’s been.'"

Clinton replied, "Donald, whatever happens, we need to work together afterward."

The politeness is surprising given the animosity they’ve showed toward one another on the campaign trail. Cardinal Dolan, who sat between the two during the dinner, even joked that he was catching a cold from sitting in the chilliest place on earth.

And while he admitted there were “awkward” moments, he said he was moved by some of their private conversations.