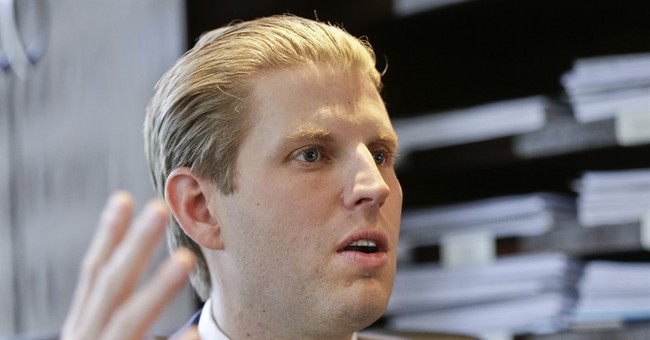 GOP nominee Donald Trump’s greatest asset on the campaign trail may be his children, who’ve shown they can give impassioned and articulate defenses of their father over any issue he seems to be embroiled in.

Enter Eric Trump, who on "CBS This Morning" Tuesday defended his father in the latest controversy involving the Khan family.

Host Charlie Rose pushed back, noting that gold star families are not ruthless, but have made the ultimate sacrifice losing a loved one. His father, he noted, “seemed late coming to appreciation of that.”

“Theres no question,” Eric pushed back. “But for my father, in terms of the Khan family, it’s not about a soldier, who’s an amazing guy … this is about a big problem that we have around the world, and that’s radical terror. …  my father’s simple message is not an anti-Muslim message, it’s an anti-terror message. We have ISIS and they’re running rampant around the world and we have to do something about it.”

When asked by the hosts whether anyone on Team Trump suggested to the GOP nominee that maybe he should apologize, Eric noted that he believes his father has already by calling U.S. Army Capt. Humayun Khan a hero on many occasions.

“Do you think he’s wrong on this?” host Gayle King asked.

“I think this is something that was honestly blown hugely out of proportion,” Eric responded. “First of all, he said the Khan family looked like amazing people in that interview … he called him a hero so many different times. This isn’t a Muslim thing, this is an ISIS thing … he doesn’t want to see more Americans dead.”

View More: Politics News|Live News|More News Videos
Massive Survey Finds Americans' Views on Gender Are Shifting, But Not the Way Leftists Want
Spencer Brown
Man Airdrops Something That Should NEVER Be Shared on a Southwest Flight
Matt Vespa
It Took the Death of 50 Illegal Immigrants for the Media to Admit There's a Problem at the Border