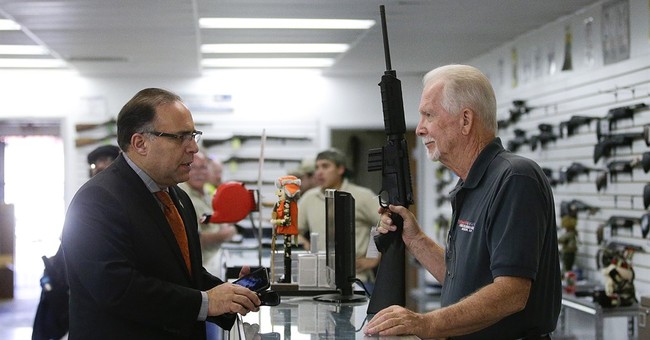 New calls for gun control have gone hand in hand with spikes in gun sales during Obama’s presidency, and June was no exception.

According to a report it released on Sunday, the FBI processed more than 2.1 million gun-related background checks in June, which is 600,000 more than the last record set the year prior.

“That makes June the 14th month in a row to see a new background check record, including every month of 2016. This year is on pace to break 2015’s record for most checks in a year,” The Washington Free Beacon reports.

Last month’s numbers are still lower than the first four months of the year, which tracks with standard seasonal lulls in sales for the industry. However, June’s numbers are higher than May’s—a departure from previous years when June had traditionally seen the fewest checks of any month.

June’s record comes as gun and ammunition dealers have seen spikes in sales following the deadly terror attack in Orlando, Florida and a subsequent push for new gun control measures in the House and Senate. Some companies saw a five-fold increase in sales during the weeks following the attack and legislative push.

“As I have been predicting for months we are going to keep on breaking records through the November election,” said Alan Gottlieb of the Second Amendment Foundation, reports The Washington Free Beacon. “Obama, Clinton, and Bloomberg’s anti-rights rhetoric is driving more and more people to gun stores.”