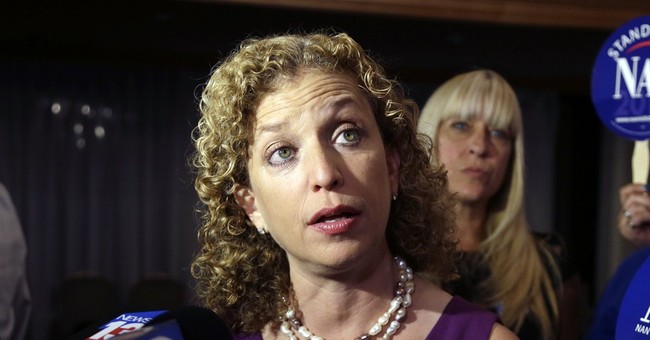 It’s not just her primary challenger Debbie Wasserman Schultz has to worry about—it’s now some Democrats on Capitol Hill, too, who fear the DNC chair has become too divisive a figure to unify the party ahead of the convention.

These Democrats point to her contentious relationship with the Sanders campaign throughout the primary process as reason for her to step down.

“There have been a lot of meetings over the past 48 hours about what color plate do we deliver Debbie Wasserman Schultz’s head on,” a pro-Clinton Democratic senator said, reports The Hill.

"I don’t see how she can continue to the election," the lawmaker added. "How can she open the convention? Sanders supporters would go nuts."

The lawmaker said senators huddled on the chamber floor last week to talk about Wasserman Schultz’s future and estimated that about a dozen have weighed in during private conversations. […]

There is no indication Wasserman Schultz, who is also a Florida congresswoman, has any plans to leave her post. And Senate sources stress that a final decision won’t be made until Clinton and Sanders negotiate some type of deal aimed at healing the party. President Obama, who selected Wasserman ­Schultz as chairwoman in 2011, is expected to play a major role in any such talks.

The Clinton and Sanders campaigns have already struck a deal with Wasserman Schultz to limit her role in the convention’s platform committee.

Under DNC rules, she could have appointed all 15 members of the platform committee but instead picked only four. Clinton got to fill six positions, and Sanders chose five.

The concession, however, may not be enough to keep her in the job through the Democratic National Convention.

"There’s a strong sentiment that the current situation is untenable and can only be fixed by her leaving," a senior Senate Democratic aide said. "There’s too much water under the bridge for her to be a neutral arbiter."

But a number of other congressional Democrats went on the record with The Hill to express their support for the DNC chairwoman.

Democratic Sen. Bill Nelson assured the paper that replacing Wasserman Schultz ahead of the convention is “not going to happen.”

Sanders may be right about one thing: the Democratic National Convention in Philadelphia could get “messy.”