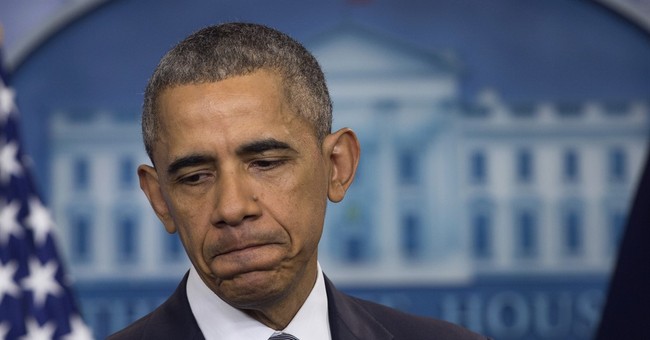 Going after domestic terror financing used to be a key tool of the war on terrorism under Bush 43, but it seems President Obama has completely abandoned the effort since taking office—and now experts and lawmakers what to know why.

The last time the federal government designated a U.S. charity as a front for terrorist fundraising, President Barack Obama had been in office for less than a month and Osama bin Laden was still at large. On Feb. 11, 2009, the Treasury Department designated the Tamil Foundation, a Maryland based charity allegedly raising funds for the Tamil Tigers, a Sri Lankan foreign terrorist organization that today barely exists.

Treasury officials claim there has been no change in policy, and protecting the nation’s financial system in the country and abroad remains a top concern, Bloomberg View’s Eli Lake reports. But does the data back up that claim?

Between the 9/11 terror attacks and the 2009 designation of the Tamil Foundation, eight major U.S.-based charities were designated for terrorist financing. Additionally, groups that were helping finance Hamas and Hezbollah were blacklisted.

And while the Obama administration has sought to “squeeze” Hezbollah, Hamas, and al Qaeda out of the international financial system, according to Daniel Glazer, the assistant secretary of Treasury for terrorist financing, no designations of U.S. charities have been made since the 2009's designation of Tamil Foundation.

Some experts say the U.S. has stopped designating U.S.-based charities in part because terrorist groups have determined it's too risky to set up a philanthropic front in the U.S. these days. "Our enforcement efforts did have an effect on the ability of groups to openly organize and use non-governmental organizations as fundraising mechanisms for designated terrorist organizations," Juan Zarate, a deputy national security adviser for counter-terrorism under George W. Bush, told me.

Zarate is in a position to know. He is one of the architects of the U.S. government's post-9/11 policy on counter-terrorist financing. He said the days of major charity designations like the Holy Land Foundation "are over in part because it is now understood the U.S. government will look closely and not sympathetically on any groups that are set up to mask or to hide funding for terrorist organizations."

While Zarate and other experts I spoke to said it would be a mistake to assume that no terrorist groups would try to set up fronts to raise money in the U.S., the nature of the business has nonetheless changed. "ISIS doesn't have to create a U.S. NGO, they run a war economy," said Zarate. "Al-Shabaab, they are taxing people, they are engaged in other kinds of illicit trade."

Nonetheless, Susan Phalen, communications director for the House Homeland Security Committee, told Lake that her committee is looking into it, as are experts such as Foundation for Defense of Democracies’ Jonathan Schanzer.

Schanzer believes the Treasury's Office of Terrorism and Financial Intelligence "sees itself as more of an global intelligence shop, leaving the domestic work to domestic agencies like the FBI." And with so much else on the FBI's plate, whether domestic terrorism-finance cases get prioritized is uncertain. Thus, in a way, he's taken matters into his own hands.

Last month, he testified before Congress that his research has found that three individuals who were involved in the Holy Land Foundation (but not indicted in a subsequent prosecution) are today working closely with a new group known as American Muslims for Palestine, which funds college groups that agitate for boycotting, divesting from and sanctioning Israel.

Of course, raising money for anti-Israel activism is not the same as raising money for suicide bombers -- legally or morally. Today Hamas is the sovereign of Gaza, where it has generated resources for rockets it launches at Israel. Hamas no longer needs an American charity to covertly raise funds for its military war against the Jewish state. So the remnants of its former charity are free to raise funds for the war of ideas against the Jewish State at American colleges.

Whether Schanzer's research or the House Homeland Security Committee can uncover some concrete answers as to why the administration seems to have stopped pursuing domestic terror financing cases remains to be seen.