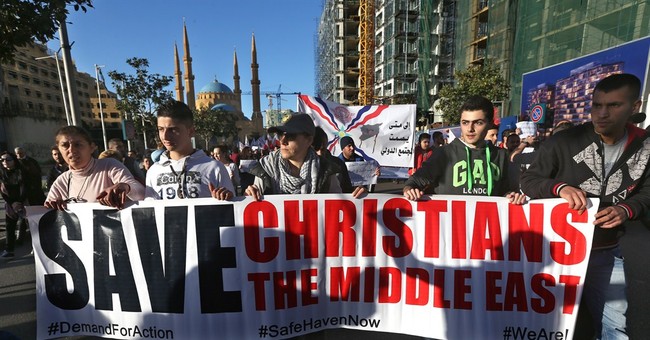 With the rise of the Islamic State the world has witnessed the persecution of Christians at an alarming rate. But the religious group is being targeted well beyond the confines of the Middle East, the State Department’s annual International Religious Liberty report found.

“In Mosul, Iraq and nearby towns, shortly after the takeover of the area by militants of the Islamic State of Iraq and the Levant (ISIL), Christians who had been given the choice to convert, pay a ruinous tax, or die, gathered their families and what few possessions they could carry, and sought all possible means to escape,” the report states. “It has forcibly displaced hundreds of thousands of people, conducted mass executions, and kidnapped, sold, enslaved, raped and/or forcibly converted thousands of women and children—all on the grounds that these people stand in opposition to ISIL’s religious dogma.”

In West Africa, Islamic extremist group Boko Haram has made their lives no better.

“People living in northern Nigeria, the Far North Region of Cameroon, and southern Chad and Niger were subject to terror and destruction as a result of Boko Haram’s quest to impose its religious and political beliefs throughout the region,” the report continued. “The group deliberately targeted Christians, as well as Muslims who spoke out against or opposed their radical ideology. As West Africa’s most active terror group, Boko Haram claimed responsibility for scores of fatal attacks on churches and mosques, often killing worshipers during religious services or immediately afterward. One of many such incidents occurred on April 14, when Boko Haram kidnapped more than 200 mostly Christian girls from Chibok, Borno State, sold them into slavery, and forcibly converted them to Islam.”

The report also discusses China’s crackdown on Christian churches, other symbols of the faith, and pastors.

"Zhejiang officials stated that crosses and churches needed to be “demolished” as “illegal structures” that violated local zoning laws. Unofficial “house” church members continued to face harassment and detention. Security officials frequently interrupted outdoor services of the unregistered Shouwang Church in Beijing and detained people attending those services for several days without charge. Reports indicated the average length of these detentions increased from hours to days. Several members of the church's leadership, including Pastor Jin Tingming, remain under periods of extrajudicial detention since leading open air services in 2011."

The congressionally-mandated report studies the treatment of religious minorities by each nation and non-state actor. And while the persecution of Christians isn't the sole focus of the report, which also found anti-Semitism on the rise, for example, it did make up a relatively large portion of the review.

“In the report’s Executive Summary, Christians are mentioned 23 times in 6 pages, and they are always cited as victims, never perpetrators, of religious persecution,” Catholic League President Bill Donohue said in a statement.