Vatican: Pope's Meeting with Kim Davis Not a 'Form of Support' 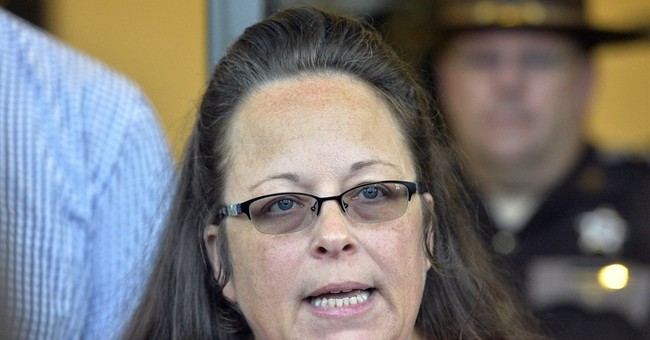 Kentucky clerk Kim Davis, who received national attention for refusing to issue marriage licenses in the wake of the Supreme Court’s Obergefell v. Hodges decision, has been a polarizing figure in the U.S., and even on the Right. Some GOP presidential candidates, for example, believe she ought to just accept current U.S. law on the issue of gay marriage, thus issuing the licenses, while others believe she—and others like her—shouldn’t be forced to violate their conscience.

Now, after issuing a separate statement clarifying that the pope’s secret meeting with Davis “should not be considered a form of support of her positions,” it seems even the Vatican doesn’t want to get in the middle of the U.S.’s debate on the issue.

Vatican spokesman  said the pontiff met with several dozen people at the Vatican's embassy that day just before leaving Washington for New York and that those meetings were due to the pope's "kindness and availability."

In a statement, he added that the “only real audience granted by the pope” at the embassy that day “was with one of his former students and his family."

"The pope did not enter into the details of the situation of Mrs. Davis and his meeting with her should not be considered a form of support of her position in all of its particular and complex aspects," Lombardi said.

Davis’ attorney Mat Staver disagrees with this assessment, however, and told the Associated Press that the Vatican had initiated the meeting with her, during which he reportedly thanked her for her courage and told her to ‘stay strong.’

Thomas Rosica, who assists the Vatican press office with English-language media, said Friday that Vatican staff did not organize the meeting. According to the National Catholic Reporter, Rosica said it might have been an initiative by the Vatican’s ambassador to the U.S., Archbishop Carlo Vigano.

Rosica said that Vatican staff were not sure the pope “knew fully each of the people he was meeting” while greeting people at the nunciature. He also said Francis had personally approved Friday’s press statement after a meeting with Lombardi on the issue.

Regardless of whether they’re backtracking on what’s widely been reported as support for Davis’ position, there is no denying that in theory, at least, he does believe in ‘conscientious objection,’ which he made clear to a reporter on his flight home from his visit to the United States.