ABC News: Youngest Terror Suspect in Custody, Two Others 'On the Loose, Armed and Dangerous" 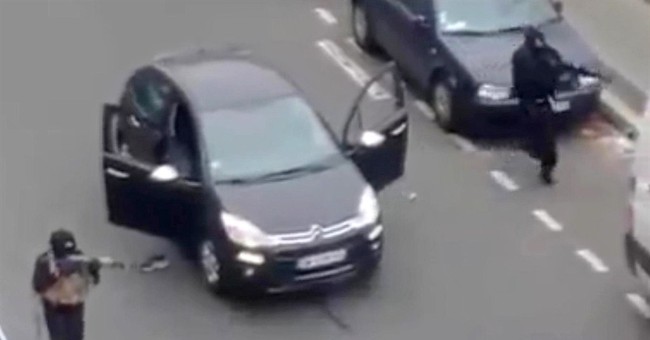 Update 9:20: ABC News is reporting that, according to French police, the youngest suspect has turned himself in. The brothers, however, are still “on the loose, armed and dangerous."

Update 9:17: NBC News is walking back its original report:

After a long day of rapidly changing information, US counterterrorism officials said Wednesday night that they cannot be certain what the status is of the three suspects in the Paris attack on Charlie Hebdo magazine. Information from French sources has been contradictory, they said.

Update 8:49pm: French authorities would not confirm NBC's earlier report that one of the suspects has been killed and two are in custody.

Authorities identified the three terrorists who killed 12 people and wounded 11 others at satirical newspaper Charlie Hebdo on Wednesday as brothers Said and Cherif Kouachi, and Hamyd Mourad. Now, U.S. counterterrorism officials have told NBC News that one of the suspects is dead and two are in custody.

Authorities identified the three men as Said Kouachi and Cherif Kouachi, both French and in their early 30s, and 18-year-old Hamyd Mourad, whose nationality wasn't immediately clear.

One of the officials, who spoke on condition of anonymity because they weren't authorized to publicly discuss the investigation, told The Associated Press that the men were linked to a Yemeni terrorist network. And Cherif Kouachi was convicted in 2008 of terrorism charges for helping funnel fighters to Iraq's insurgency and sentenced to 18 months in prison. […]

Little information was immediately available about Mourad and Said Kouachi, but Cherif Kouachi has been suspected of involvement in terrorist groups for at least a decade. In January 2005, he and another French national were arrested in Paris as they were planning to fly to Iraq via Syria. Kouachi was described at the time as one of two deputies to the leader of an operation to send young volunteers to Iraq to fight U.S.-led forces.

Authorities linked the operation to the 19th Arrondissement Network, named for the Paris district where it was based, which is home to many Muslim families with roots in France's former North African colonies. Kouachi was sentenced to three years in prison, 18 months of which were suspended.