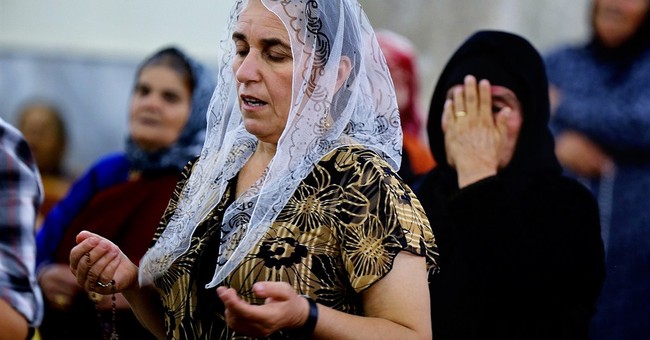 With ISIS advancing to northern Iraq on Thursday, overtaking the country’s largest Christian town and its neighboring areas, the conflict shows no signs of abating. Tens of thousands of residents fled for their lives.

ISIS militants moved into Qaraqosh and other towns overnight after the withdrawal of Kurdish peshmerga troops, who are stretched thin across several fronts, residents said.

"Qaraqosh, Tal Kayf, Bartella and Karamlesh have been emptied of their original population and are now under the control of the militants," Joseph Thomas, the Chaldean Catholic archbishop of Kirkuk and Sulaimaniyah, told AFP.

Entirely Christian Qaraqosh lies between Mosul, the jihadists' main hub in Iraq, and Arbil, the Kurdish region's capital. It usually has a population of around 50,000.

Tal Kayf, the home of a significant Christian community as well as members of the Shabak Shiite minority, also emptied overnight. [...]

At the weekend, ISIS units took over most of the Mosul hinterland which the peshmerga had occupied after government forces retreated in June.

Among its conquests was the Sinjar area, from which tens of thousands of civilians fled, including many families from the Yazidi minority who are still hiding in barren nearby mountains.

The Yazidis, and other local residents, have been stranded in the mountains since Saturday with little food and water.

An estimated 100,000 Christians have been displaced, according to Chaldean Patriarch Louis Sako, head of Iraq’s biggest Christian denomination.

“This is a humanitarian disaster,” he told AFP. “The churches are occupied, their crosses were taken down.”

The situation is so dire, a Kurdish Yazidi member of the Iraqi Parliament took to the floor to demand the Parliament intervene to stop what she referred to as “genocide.”

“We are being killed. We are being butchered. A whole religion is being wiped out from the earth,” she pleaded. “Brothers, I call upon you in the name of humanity, rescue us!”