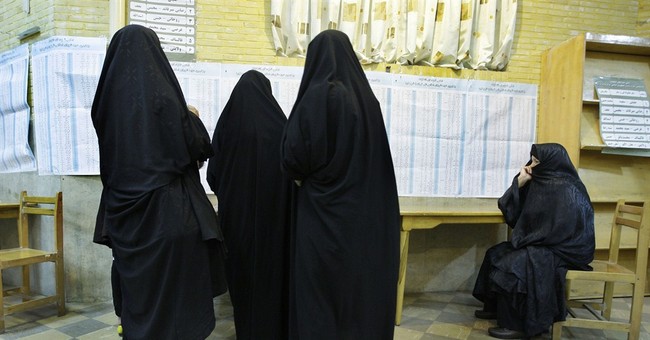 The United Nations elected Iran this week to seats on five subcommittees of the Economic and Social Council, including one on the Commission on the Status of Women. That’s right, Iran—“a theocratic state in which stoning is enshrined in law and lashings are required for women judged ‘immodest,” writes FoxNews.com—will now hold a four-year seat on a commission that is “dedicated exclusively to gender equality and advancement of women.”

Iran's election comes just a week after one of its senior clerics declared that women who wear revealing clothing are to blame for earthquakes, a statement that created an international uproar — but little affected their bid to become an international arbiter of women's rights.

"Many women who do not dress modestly ... lead young men astray, corrupt their chastity and spread adultery in society, which (consequently) increases earthquakes," said the respected cleric, Hojatoleslam Kazem Sedighi.

As you can imagine, once word got out Iranian women’s rights activists petitioned the U.N. to ask that member states oppose the election.

“In recent years, the Iranian government has not only refused to join the Convention on the Elimination of All Forms of Discrimination against Women (CEDAW), but has actively opposed it,” the letter states. “The Iranian government has earned international condemnation as a gross violator of women’s rights. Discrimination against women is codified in its laws, as well as in executive and cultural institutions, and Iran has consistently sought to preserve gender inequality in all places, from the family unit to the highest governmental bodies.

“Iran’s discriminatory laws demonstrate that the Islamic Republic does not believe in gender equality: women lack the ability to choose their husbands, have no independent right to education after marriage, no right to divorce, no right to child custody, have no protection from violent treatment in public spaces, are restricted by quotas for women’s admission at universities, and are arrested, beaten, and imprisoned for peacefully seeking change of such laws.”

According to its website, the Commission plays a vital role in promoting women’s rights, documenting the reality of women’s lives in countries around the world, and shaping global standards on gender equality and the empowerment of women. The Iranian gender-equality activists cautioned that, through membership in the CSW, the Iranian government will use the opportunity to do just the opposite.