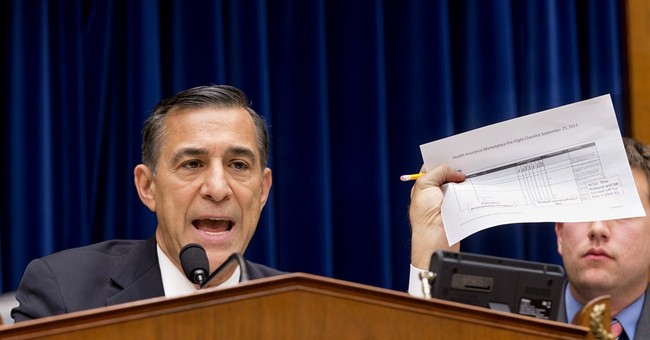 House Oversight and Government Reform Committee Chairman Darrell Issa warned Monday on Fox News that there are no checks in place for Obamacare navigators, the individuals tasked with helping Americans sign up for health insurance. They don’t have to follow any of the rules that every state in the country has for insurance people, he said. In other words, navigators are not bonded, finger printed, or identified in any way that would help prevent felons or identity theft perpetrators from having access to consumers’ personal information.

“This is basically just another form of community organizing paid for with your tax dollars,” Issa said. “ACORN revisited, if you will.”

“What they’re really hired to do is to convince people to get Medicaid under this new program, convince them to get a highly subsidized health care plan,” Issa continued. “They’re not there to sell the merits of the insurance, they’re there to sell the subsidy.”

“This is the federal government at work using federal dollars,” Rep. Pete Sessions added. “I believe that on the very surface of it, it is fraud at its very finest.”

But Kathleen Sebelius has admitted that it’s possible convicted felons could be hired as navigators, a number of ex-ACORN operatives are now signing people up for Obamacare, and navigators have been documented as counseling applicants to lie about their income on forms to qualify for a larger subsidy.

Clearly, the scrutiny is more than justified.