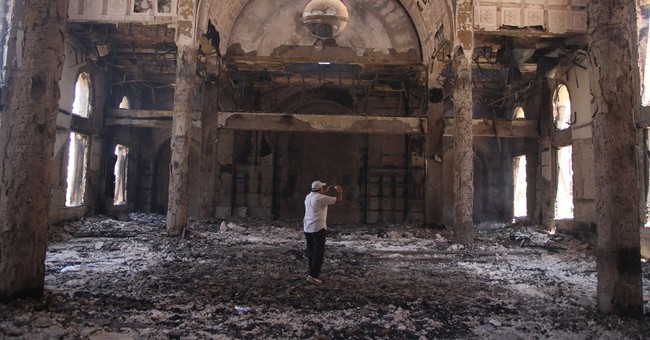 As the violence in Egypt intensifies, Coptic Christian churches have also been the target of attacks by Muslim Brotherhood supporters. In the past two days alone, there were nearly 40 incidents:

Egypt's MENA agency said supporters of ousted President Mohammed Morsi set fire to the Prince Tadros church in the province of Fayoum, where three similar attacks occurred on other churches the day before.

Ishaq Ibrahim from The Egyptian Initiative for Personal Rights group, documented as many as 39 incidents of violence against churches, monasteries, Coptic schools and shops in different parts of the country on Wednesday. Violence across Egypt in the past two days has left at least 578 dead and 4,200 injured, according to Health Ministry figures.

Looking to crack down on church-related attacks, Egyptian authorities on Thursday referred 84 people in Suez, some Muslim Brotherhood protesters, to military prosecutors on charges of murder and burning churches, the MENA news agency said, Reuters reports.

And some media, as Andrew McCarthy over at NRO points out, are disingenuously reporting what’s really going on, claiming that these actions are reprisal attacks.

But the Brotherhood was not ousted by the minority Copts. To be sure, the Copts far prefer to take their chances with a largely secular, technocratic government backed by the armed forces than the rampant persecution they endured while the Brotherhood was running the show. But it is the army, not the Copts, who ejected Morsi. AFP tries to obscure this by recounting that “the Coptic church backed Morsi’s removal, with Patriarch [i.e., Pope] Tawadros II appearing alongside army chief General Fattah al-Sisi as he announced the military coup.” As I observed in writing about the coup in the August 5 edition ofNational Review, however, Pope Tawadros was hardly alone — General Sisi also gathered by his side significant Islamic supremacist leaders: Grand Mufti Ahmed al-Tayeb of al-Azhar University and leaders of the Salafist al-Nour party (in addition to prominent secularists).

In a country with a population of 80 million, Christians only make up roughly 8 million—and this is far from the first time they’ve been victims of Muslim attacks. Violence really picked up, however, after the July 3 coup that took out former President Mohammed Morsi. Pope Tawadros II urged Egyptians to prevent bloodshed just days before Wednesday's violence.

I appeal to all to preserve lives of fellow Egyptians, with restraint to prevent violence and reckless attacks against any person or place.

The Coptic Defense League has posted photos and videos of the attacks on its Facebook page.