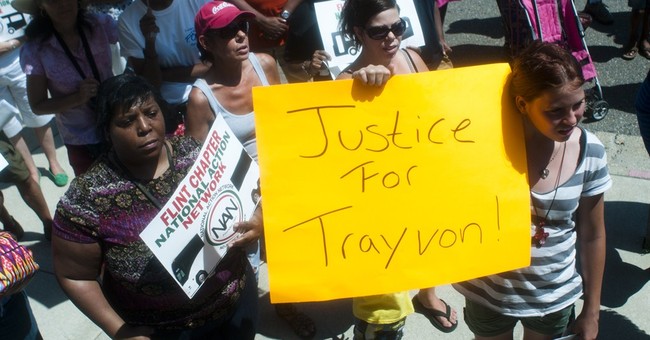 People gathered in more than 100 cities across the nation on Saturday—one week after George Zimmerman was acquitted—demanding “Justice for Trayvon.” But as MRC’s Dan Joseph discovered, no one at the Washington, D.C. rally was demanding justice for the countless victims of gang violence who go unnoticed by the public on a daily basis. .

Ryan Bomberger over at the Radiance Foundation drives Joseph’s point home (emphasis mine):

According to the FBI, a larger percentage of white victims of firearm homicide are killed by black offenders (14%) than black victims killed by white offenders (7.2%). That’s twice the murder rate. To add further clarity, 91% of the 2,695 black victims of firearm homicide in 2011 were killed by other blacks—91%. Yet somehow, Trayvon’s death is exalted as representing racism and “gun control” failure in our country. Hoodies popped up everywhere in a visceral reaction to an exploited case that doesn’t reflect reality.

Who was willing to riot for the other 11,078 homicides, where the overwhelming majority of offenders were black? Which media outlet demanded justice for those killed by black assailants who were responsible for 37.7% of all homicides (whites were responsible for 32.5%)? The CDC reports the rate of firearm deaths among whites, in 2010, was 1.93 per 100,000 people. Among blacks, this was 10.5 times higher, at 20.35 per 100,000. Who is mourning this black-on-black violence with a March, press conference, new rap single, or moments of silence at concerts?

As Katie reported this morning, six people were killed and another 23 were wounded in shootings across Chicago over the weekend but it seems Al Sharpton and other civil rights “leaders” are too busy stoking racial resentment to protest black-on-black violence.