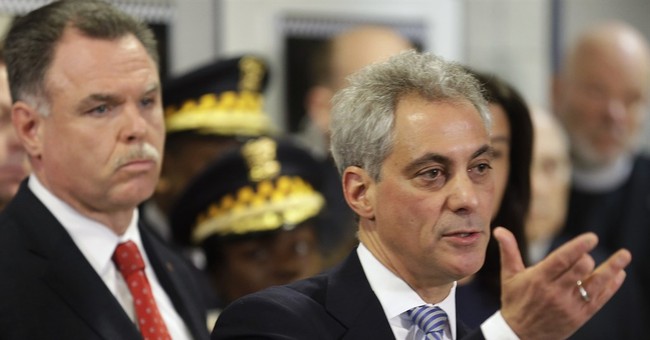 Over the weekend, Rev. Al Sharpton organized protests in numerous cities across the country in order to get "justice for Trayvon." The protests were in response to George Zimmerman being found not guilty by a jury of his peers a week ago. At the same time in Chicago over the weekend, six people were killed and 23 were wounded. More from the Chicago Sun-Times:

Six men were killed and at least 23 people — including a 6-year-old girl — were wounded in shootings across the city since Friday night.

Asked Sunday about Chicago’s reputation in the wake of another violent weekend, Mayor Rahm Emanuel said he’s primarily “concerned about the safety and security of our neighborhoods, and our residents.”

Bloodstains on a concrete roadway marked the site where Donald Lewis, 25, of the 2600 block of West 12th Place, was fatally shot outside a group of boarded-up Cabrini-Green row homes on the Near North Side early Sunday. He was taken to Northwestern Memorial Hospital, where he died at 5:35 a.m., police said. A 23-year-old man was shot in the leg and treated at Northwestern, police said.

They were shot about 4 a.m. Sunday in the 500 block of West Pearson. A neighbor who asked not to be named said Lewis was hanging out the street hours earlier with a large group of friends, chatting and drinking beer.

Earlier Sunday, one man was killed and three other people were wounded in a shooting on the Far South Side, police said. They were standing outside with a group of people in the 600 block of East 131st Street about 1:50 a.m. when a fight broke out and someone fired shots, police said.


Where's Al Shartpon when it comes to protesting black on black crime? He's too busy out in the safe streets race baiting.