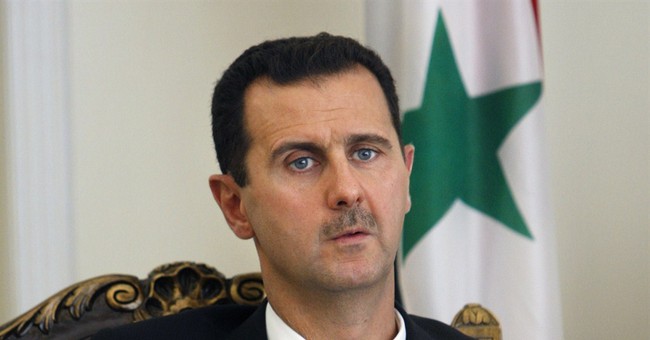 The administration announced Thursday that it has conclusive evidence Syrian President Bashar Assad’s government has indeed used chemical weapons against rebel forces, including the nerve agent sarin, which has killed up to 150 people in the last year. President Obama has long said that the use of chemical weapons in Syria would be a game changer. Now, it looks like U.S. policy toward Syria is about to change dramatically:

"The president has made a decision about providing more support to the opposition that will involve providing direct support to the [Supreme Military Council]. That includes military support," Deputy National Security Adviser for Strategic Communication Ben Rhodes told reporters. […]

"The President has said that the use of chemical weapons would change his calculus, and it has," he continued.

In terms of further response, Rhodes said, "we will make decisions on our own timeline" and that Congress and the international community would be consulted.  Mr. Obama is heading to Northern Ireland Sunday for a meeting of the G8 group of nations; Rhodes indicated the president will consult with leaders of those countries.

"Any future action we take will be consistent with our national interest, and must advance our objectives, which include achieving a negotiated political settlement to establish an authority that can provide basic stability and administer state institutions; protecting the rights of all Syrians; securing unconventional and advanced conventional weapons; and countering terrorist activity," Rhodes said.

While Sens. John McCain and Lindsey Graham are eager to provide “lethal assistance, especially ammunition and heavy weapons” to rebel forces in Syria, Rhodes did not comment on the type of military support the administration intends to provide. However, he did mention “nonlethal assistance” in the form of communications and transportation equipment, which would help improve the effectiveness of opposition forces, but said a decision has not been made about enforcing a no-fly zone.

“The use of chemical weapons violates international norms and crosses clear red lines that have existed within the international community for decades," Rhodes said.