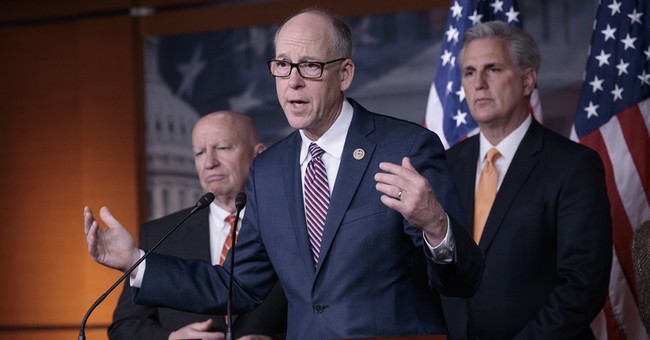 House Republicans held a press conference Thursday demanding that House Speaker Nancy Pelosi (D-CA) hold hearings on the Green New Deal resolution, proposed by Rep. Alexandria Ocasio-Cortez (D-NY). They also wrote a letter to Pelosi outlining their concerns with the resolution and calling for a hearing to investigate those concerns.

Rep. Greg Walden (R-OR), the GOP leader on the House Energy and Commerce Committee, said that the proposal “threatens the entire United States economy and it stretches into every corner of American life.”

“From one-size-fits-all government-run healthcare to federal job and wage growth guarantees to federally-mandated building upgrades,” he said, “to 100 percent zero-emission energy in just 10 years, and not only do we see this as unrealistic, we fear it can put the American dream out of reach for millions of Americans.”

Walden said holding hearings on the matter would allow a serious look at the cost of these proposals.

“Let’s let the American people have a say and a view on these policies,” he emphasized. “How Democrats should stand behind their proposals and give the American people the chance to learn what they are really about. Democrats and their allies dispute the various estimates that show the Green New Deal costs $93 trillion.”

That was likely a reference to one study that estimated the resolution would cost $93 trillion over ten years.

House Minority Leader Kevin McCarthy (R-CA) said at the press conference Thursday that the Green New Deal is “a bad deal for the working families and the low-income.”

“This Green New Deal affects too much of every aspect of our life,” he emphasized, “that’s why we want to have an open process much as Speaker Pelosi claimed to have on her opening day when she became Speaker.”

Rep. Rob Bishop (R-UT) raised some eyebrows during the press conference by saying the resolution was "tantamount to genocide," adding, "that may be an overstatement but not by a whole lot."

Amy Harder with Axios followed up with Bishop on his comment after the event, pointing out that "genocide is defined as 'the deliberate killing of a large group of people, especially those of a particular ethnic group or nation,'" and asking,  "how is the Green New Deal like genocide?"

"And you think the Green New Deal is going to kill you?" Harder pressed.

The current text of the ambitious resolution proposes “overhauling transportation systems in the United States to remove pollution and greenhouse gas emissions from the transportation sector as much as is technologically feasible,” and “upgrading all existing buildings in the United States and building new buildings to achieve maximum energy efficiency, water efficiency, safety, affordability, comfort, and durability.”

Pelosi is unlikely to hold hearings on the proposal and has repeatedly distanced herself from it, initially referring to it dismissively as “the green dream or whatever they call it.”