Mulvaney on Lindsey Graham: 'Not as Good a Politician as Donald Trump or Else He'd Be President' 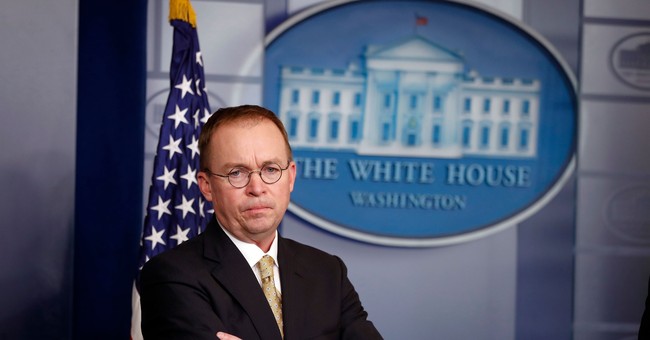 Acting White House Chief of Staff Mick Mulvaney responded on NBC’s “Meet the Press” Sunday to Sen. Lindsey Graham’s (R-SC) warning that President Trump would lose his base if he backed down on his demands for funding of the border wall.

Mulvaney was asked about Graham’s comment to Fox’s Sean Hannity Wednesday that “if he gives in now, that’s the end of 2019 in terms of him being an effective president," in reference to Trump’s $5.6 billion demand for the border wall.

"I like Lindsey Graham and he's a good friend of mine," he said. "We're from South Carolina. He’s not as good a politician as Donald Trump or else he'd be president. They both ran and one of them won and one of them lost."

He went on to point out the president’s attempts to reach a compromise on the issue.

"The president is interested in resolving this issue. It's why we've been meeting for two weeks. It's why we met yesterday with the vice president and the team for several hours,” he said. “It's why the president met with the leadership teams three days ago for several hours, and why we hope to meet again tomorrow. The president stayed here over Christmas and over New Year's when everybody else went home. I don't know what else the gentleman can do to prove to people he's interested in reaching a deal."

Mulvaney also addressed the idea that conservative pundits were affecting Trump’s decision-making on the issue.

"I would make the argument that the president has probably more sway over Sean Hannity and Ann Coulter than vice versa," he said.

Later in the interview, Mulvaney argued that the president’s focus is to improve conditions at the border even if that means not building a concrete wall.

“He was willing to agree and he mentioned this at the Rose Garden press conference to take a concrete wall off the table,” he said. “If that is not evidence of our willingness to solve the problem, because again what’s driving this is the president’s desire to change the conditions at the border.”

"We now have a great steel business that's rebuilt in the United States. Steel is stronger than concrete," President Trump told reporters in the Rose Garden Friday. "If I build this wall or fence or anything that Democrats need to call it because I’m not into names, I’m into production, I’m into something that works."

Mulvaney met with Vice President Pence, White House aides, and congressional leaders' staff Saturday in attempts to reach some agreement to end the partial government shutdown. They are expected to meet again Sunday.