Graham Has a Warning for Trump About Border Wall Fight 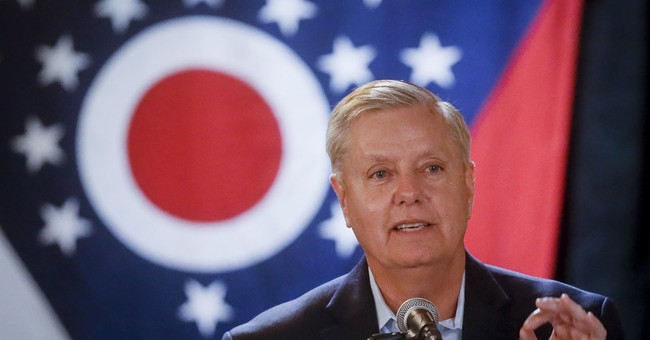 With the partial government shutdown in its second week, Sen. Lindsey Graham has a warning for President Trump about the fight over border wall funding: to give up would be to kiss the presidency goodbye.

“He’s not going to sign a bill that doesn’t have money for the wall. I can tell you exactly how this is going to end. The president is going to challenge Democrats to compromise and if they continue to say no, they’re going to pay the price with the American people," Graham said Wednesday on Fox News's "Hannity."

“If he gives in now, that’s the end of 2019 in terms of him being an effective president," he continued. "That’s the probably the end of his presidency. Donald Trump has made a promise to the American people. He’s going to secure our border."

He also said he hopes that incoming Republican lawmakers would view the border wall fight as one “worth having.”

“That’s the end of us if we give in on this issue as Republicans," Graham said. "I hope Mitt Romney and everybody else knows this is a fight worth having."

Graham was referring to Romney’s op-ed in The Washington Post this week that was highly critical of Trump’s character.

Romney did say on CNN Wednesday, however, that he “would vote for the border wall.”

House Democrats plan to vote on legislation Thursday that would reopen the government.

Democratic leaders have scheduled a pair of votes on a package of bills to end the shutdown and give Congress more time to negotiate a deal with the White House over border funding.

The votes will come shortly after Democratic leader Nancy Pelosi returns as House speaker and Democrats reclaim the majority for the first time in eight years.

But even if the bills are approved, as expected, the shutdown will likely go on. The package still must clear the GOP-controlled Senate, but Majority Leader Mitch McConnell, R-Ky., has said he won’t call for a vote on legislation to end the standoff unless it has Trump’s backing. (USA Today)

Trump did not appear poised to back down on border wall funding, however, and said Wednesday that the government would remain shut down for "as long as it takes."