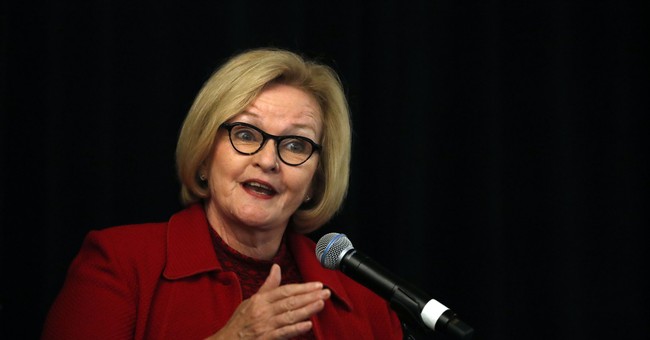 Outgoing Sen. Claire McCaskill (D-MO), a vulnerable red-state Democrat who lost her bid for re-election, commented Thursday to the New York Times “Daily” podcast about abortion activists who complained that she didn’t speak out enough on the issue.

The New York Times asked her about Missouri’s latest abortion restrictions and the fact that only one abortion clinic remains in the state. They said she had been “quiet” on the issue and cited complaints by Democratic abortion activists who wanted her to discuss it more.

McCaskill complained that these women were in an ideological echo chamber on the issue and were blind to the broader needs of the state.

“My voting record is perfect,” she pointed out. “I think I have been clear about my position. I think the people you talked to…are young women who have not spent any time outside of their group of people who agree with them. They probably don’t understand that Trump’s success had a whole lot to do with economic angst and I knew that if I ignored the meat and potatoes of this election which was all about will people be able to get healthcare, can they afford healthcare, all about the price of prescription drugs. These were all things that everybody in Missouri, when I’d go out to all the town halls, everybody would shake their heads.”

McCaskill has a 100 percent voting record on abortion from the abortion advocacy group NARAL. She was also backed by the pro-abortion group Emily’s List.

When asked what she would want to say to these critics, McCaskill replied that she would tell them to “shut up."

“You know it’d be one thing if I’d ever wavered but I’ve had to take a lot of tough votes over the years on this issue,” she added. “I have been standing in the breach for women’s rights as it relates to reproductive freedom for all of my adult life and the fact that these young women didn’t realize that and just be quiet, roll up your sleeves, and work their a** off for me was beyond irritating. Can you tell?”

She compared her record to that of her victorious opponent, Sen-elect Josh Hawley (R-MO), who is very opposed to abortion.

“Josh Hawley thinks the morning after pill should be illegal. He has said publicly he wants to overturn Roe v. Wade,” she said, “so to me there is a huge difference between the two of us and the fact that they didn’t appreciate that difference and they were willing to be critical that I wasn’t talking about it enough: dumb.”

“They need to remember who their friends are and not make it more difficult for their friends,” she concluded.

It is hardly surprising that McCaskill was not regarded as extreme enough on abortion given the Democratic party’s leftward shift on the issue. In 2016, they added a call to end the Hyde Amendment ban on taxpayer funding for abortion to their party’s platform.

DNC Chair Tom Perez said in a statement in 2017 that “every Democrat, like every American, should support a woman’s right to make her own choices about her body and her health. That is not negotiable and should not change city by city or state by state.”