Trump Jr. Points Out That Something's Missing From Sen. Gillibrand's Vision of the Future 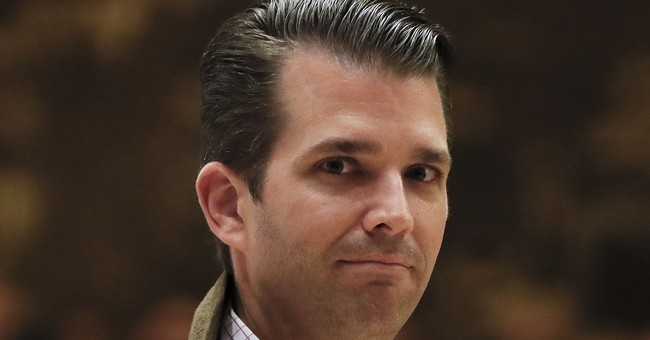 Donald Trump Jr. responded Wednesday to Sen. Kirsten Gillibrand’s (D-NY) vision of the future, pointing out that in her vision his sons wouldn’t have one.

Sen. Gillibrand, who is potentially running for president in 2020, tweeted that the future is “female, intersectional,” and, “powered by our belief in one another.”

Trump Jr. asked Gillibrand when he should inform his sons that "there's no future for them."

Good to know. My girls will be excited about this. When is it appropriate to let my boys (9, 7 and 6 years old) that there's no future for them?

Not sure this is a winning platform but you be you. https://t.co/pCu0GbPyAi

Many others on Twitter also took issue with Sen. Gillibrand’s vision. Sen. Marco Rubio (R-FL) said the future was “American,” not based on identity politics.

Both sexes remembering they actually need and like each other
Interstellar
Powered by actual power plants.

Liberals push a gender neutral society while its leaders tweet the future is female. At minimum Democrats have a major messaging problem.

Also most Americans appreciate gender EQUALITY. Not 1 gender dominating. @SenGillibrand should think b4 she tweets. https://t.co/noajAMbuCV

"Powered in our belief in one another*"

* Except if you're Jewish, Christian, and/or a male of the species.

Sen. Gillibrand is still weighing a 2020 presidential bid along with a crowded field of colleagues. She said deciding whether she should run for president is a “moral question.”