Sen. Gillibrand Weighs Presidential Run: 'To Me It's Really a Moral Question' 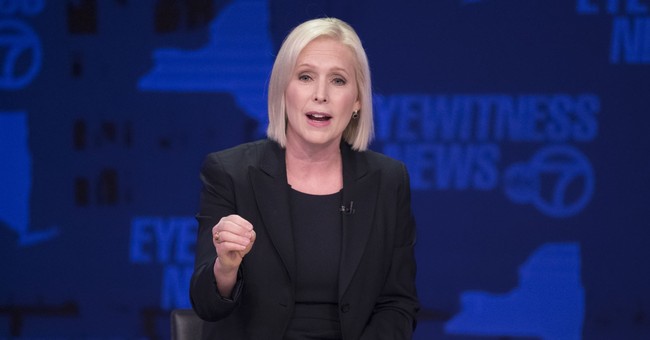 Sen. Kirsten Gillibrand (D-NY) told MSNBC’s Chris Hayes Monday evening that she has to decide if she’s “called” to run for president in 2020, telling Hayes that for her it’s a “moral question.”

When asked about a potential 2020 presidential run, Gillibrand said “to me it’s really a moral question. I believe in right versus wrong and unfortunately up until this election I believed that wrong was winning.”

She went on to accuse President Trump of causing moral degradation, saying she views her work as restoring the country’s “moral compass.”

“As I traveled the state, as I traveled the country, I really saw the response and the effect of all the things that Donald Trump has put into this country over the last two years and it’s so disturbing and it’s really called me personally to fight as hard as I possibly can to restore that moral compass,” she said.

Some of Gillibrand’s efforts to restore the nation’s “moral compass” under the Trump administration have included defending federal funding going to Planned Parenthood, the nation’s largest abortion provider, and calling to abolish Immigrations and Customs Enforcement (ICE).

She expressed concern that the country was losing its “core principles that we care about one another, that we believe in the golden rule, that you should fight for other people’s kids as hard as you fight for your own.”

“I feel that that’s been crumbling and lost under the presidency,” she emphasized.

“The sole thing I have to consider that I have to think long and hard about is whether this is what I’m called to do,” she concluded.

Despite her current consideration of a 2020 run, Gillibrand promised in October during a debate that she would serve her full six-year Senate term if re-elected.