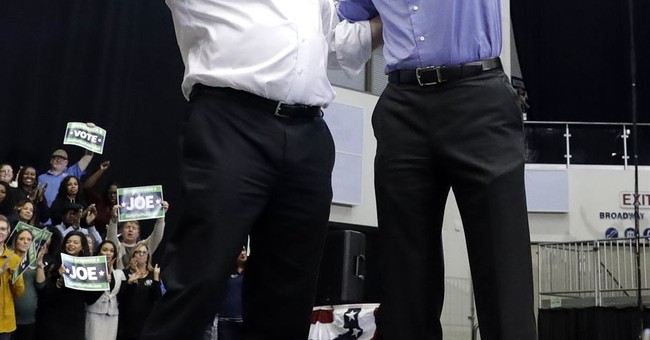 Vulnerable Democratic Sen. Joe Donnelly (IN), who is a moderate on many issues and claims to be “pro-life,” had a rather unusual supporter at his rally Sunday. Former President Barack Obama put aside policy disagreements and campaigned for the red-state Democrat who supports President Trump’s border wall.

“Joe Donnelly and I didn’t agree all the time, but Joe always let me know where he stood and I knew what he believed in and that he was always focused on what’s the best thing for the Hoosiers that he served,” Obama said at the rally. “And he was honest and he was direct, so you can count on that. That’s what you want. You don’t just want a yes man all the time.”

Obama also told those gathered to "choose hope over fear" and accused Trump of a “political stunt” with his response to the caravan of migrants coming through Mexico.

"They're telling us that the single most grave threat to America is a bunch of poor, impoverished, broke, hungry refugees a thousand miles away," Obama said. "That's the thing that's really going to threaten Gary, Indiana."

“They’re even using our brave troops, sending them down as a political stunt,” he added. “The men and women of our military deserve better than that.”

However, Sen. Donnelly himself, in response to a question about the caravan, told reporters a couple of weeks ago that “we have to do whatever’s necessary to protect our border. That entails whatever’s necessary, whether it’s military or whether it is border agents, whatever we need to do.”

Republicans have been calling Donnelly “Mexico Joe” because until last year he had stock in a family business that operated a factory based in Mexico.

President Trump will be appearing at a rally for Braun Monday evening.

Trump previously campaigned for Braun on Friday where he said it was "no surprise Joe Donnelly is holding a rally this weekend with Barack H. Obama."

In a recent debate, Donnelly also faced questions about his "pro-life" label. Braun said Donnelly could not really call himself "pro-life" given his voting record.

The race is extremely close with Braun and Donnelly essentially tied, according to the latest polling.