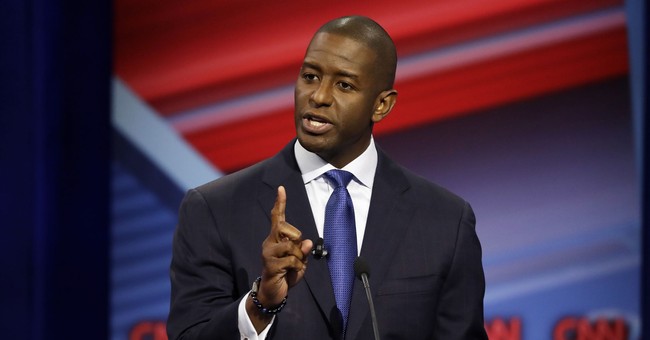 "I have not called the President a racist, but there are racists in his sympathizers who believe he may be, which is why they go to his aid, which is why he has provided them cover,” he told CNN’s John Berman. “I believe his cover has led to much of the degradation in our political discourse."

Gillum’s remarks about the president are similar to ones he made about his Republican opponent Rep. Ron DeSantis in a debate last week.

In an earlier interview with MSNBC’s “Morning Joe,” Gillum said he didn’t want to get in to petty fights with the president or his opponent, citing an old expression about not wrestling in the mud with a pig.

“I can think of no one better who wants to wrestle in the mud than the president and Mr. DeSantis,” he said. “I’m not interested in that. I’m interested in what we can do to improve the lives of people here in the state.”

He also dismissed the fact that he’d received “Hamilton” tickets from an undercover FBI agent who was conducting an ethics probe.

"On the issue, I've said all along I have zero tolerance for corruption,” he told MSNBC Thursday, “I'm not under FBI investigation, and neither is my city. What we've done is aided them all the way along. ‘Hamilton' has, again, been a sideshow."

Gillum initially replied to the scandal by saying he’d received the tickets from his brother. He also accused the GOP of attempting to reinforce “stereotypes about black men,” by bringing up the issue.

However, the text messages from the federal investigation into corruption in Tallahassee indicate Gillum may have known that the undercover FBI agent, who was going by the name Mike Miller, was providing the tickets, despite previously saying he received them from his brother.

Gillum and DeSantis are basically tied as Election Day nears, according to the latest polling.